An All-New Eddie Bauer Appears
In The Flatiron District 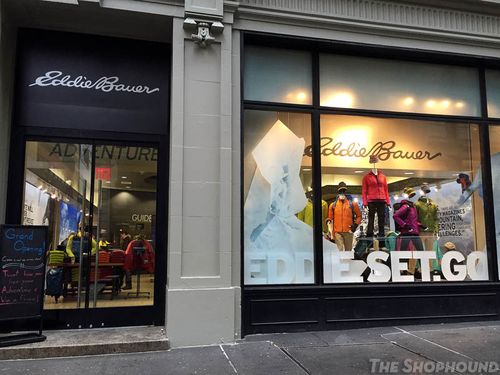 A couple of years ago, The Shophound was invited to some press previews for retailer Eddie Bauer which was trying to revamp itself after a bankruptcy that closed its large but dull Manhattan stores along with many others around the country. As it usually does at such events, the merchandise looked fresh and appealing, and we wondered how long it would be before Eddie Bauer could bring its new self back to the city.
About four years, apparently.
This week, the Seattle based chain came back to New York with a 1,500 square foot store at Fifth Avenue and 15th Street where a Bebe unit once stood. People who remember the bland Eddie Bauer stores in SoHo and Midtown that closed during the last decade should be pleasantly surprised at the new version of the brand which is really more like more like the original version. In its re-invention, the company went back to its roots as an outfitter and a pioneer in down-filled outerwear. Gone are the tables and racks of watered down khakis and pullovers. In their place you'll find some robust flannel shirts and apparel designed to withstand more serious expeditions. The store that just opened is not in its permanent incarnation, however. It will remain open through Valentine's Day when it will shut down for a full renovation that will take it to 4,000 square feet to showcase the brand's full range of product. For the moment, it is showcasing a capsule of the brand's best merchandise including it's burgeoning shoe collection, but the highlight here is the outerwear, which has been the revamped brand's greatest strength under the proprietary First Ascent label. There are plenty of down jackets, but smartly designed with functional details and eye catching designs that separate them from your basic Michelin Man puffer. The new Eddie Bauer is positioned to compete with Patagonia, L.L.Bean and The North Face, but now it has the heritage based credibility that it had been ignoring in its previous quest for mass-market domination. When it reopens later next year, we should see more of the bags and accessories as well as the fishing, expedition and camping gear that brought the brand its initial success. In the meantime, it's the perfect place to pick up a brightly colored micro-weight down vest to slip under your coat for when the Polar Vortex decides to visit us again this winter. 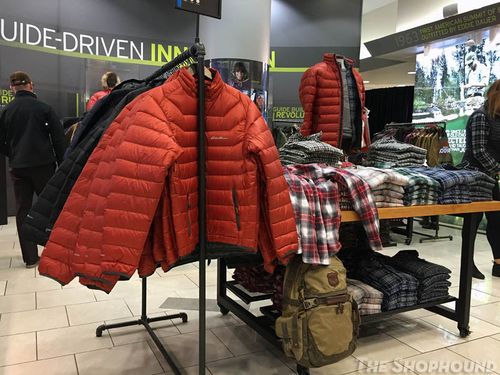