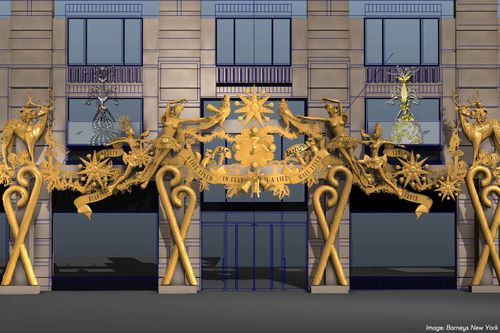 Thanksgiving is kinda late-ish this year, which seems to have given New York's retailers license to unveil their Holiday windows as early as possible. Walk past Manhattan's big stores this week and see all the windows conspicuously shrouded as the visual teams furiously work to get those lights and tinsel trees in place. Barneys' highly publicized promotion with film director Baz Luhrmann is set to be unveiled tomorrow, just as the weather is finally expected to cool down to something reasonably appropriate for the Holiday season (it is currently 61˚F  outside as we type this).
Barneys has a lot riding on the Luhrmann collaboration. It's Holiday promotions have hit sour notes for the past three years running which is particularly embarrassing for a store whose hilarious Holiday windows were once the talk of the town and one of the store's signature elements. This time, under Luhrmann's direction, the store will be going big and reintroducing some glitter and whimsy back into its newly super-serious minimalistic store. The Madison Avenue storefront will be covered with an elaborate façade (rendering pictured above), and, beyond just having animated displays, Luhrmann, is wife and creative partner Catherine Martin and designer Zaldy have been creating elaborate costumes for live performers who will appear in the windows and on the store's balconies throughout the season. Shoppers can look forward to ice skaters in the windows and a dancer/contortionist called Elphresh who will appear in a glittering gold romper. Weekends will bring the Queens of Night and Light appearing hourly on the store's second floor balconies in voluminous ballgowns to serenade the Madison Avenue crowds and more. We are cautiously optimistic that, after forays into celebrity, cartoons, ostentatious hip-hop-tinged special items and pretentious artsy-fartsy-ness, the folks currently running Barneys may have finally found their way back to the kind of sensibility that originally endeared New Yorkers to Barneys in the first place. If this Holiday promotion resonates with customers, maybe they will re-evaluate that "Taste! Luxury! Humor!" slogan they were so quick to dismiss.
Anyway, Barneys isn't the only store throwing itself a party tomorrow. Lord & Taylor, which is undergoing its own ongoing rejuvenation program, will be lighting up its windows on Thursday as well.
Bergdorf Goodman will be unveiling its windows, currently the city's most acclaimed, on Monday the 17th. The UNICEF Snowflake over the intersection of Fifth Avenue and 57th Street will also be lit simultaneously, and 10% of the evening's proceeds will be donated to the U.S. fund for UNICEF.
Saks Fifth Avenue is conservatively holding its Holiday window reveal back until Monday November 24. With new ownership and management, the store is also looking to make a splash, so say goodbye to those illuminated dancing snowflakes on the façade that the store has presented in the past seasons. This year, Saks is promising The Rockettes themselves at the unveiling as well as a display from Fireworks by Grucci. The windows will pay tribute to the Roaring '20s and include brand new high-tech projections and lighting schemes. The launch will be live-streamed at Saks.com.
Bloomingdale's will be celebrating its windows on Monday as well with a live performance from Broadway star Idina Menzel at 5 PM on the Beacon Court of the Bloomberg Building across 59th Street along with the cast of the Off-Broadway show Illuminate.
Plan to leave work early.