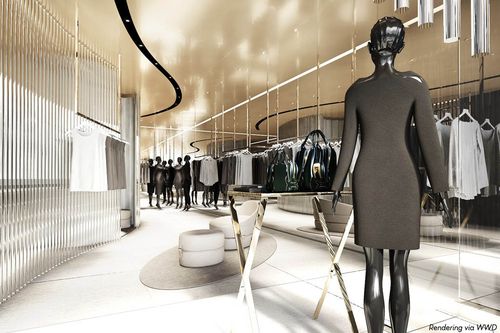 The luxurious French cult brand Jitrois is looking to raise its profile this Spring with a new boutique on Madison Avenue just a stone's throw from fellow countryman and purveyor of expensive things Christian Louboutin. The sleek, 700 square foot shop at 959 Madison Avenue, formerly the independent boutique Shen New York, (pictured below) near 75th Street is expected to be renovated and redesigned in just a couple of months in the style of the label's other boutiques with dramatic lighting and undulating walls and fixtures designed by architect Christophe Pillet (see renderings above). The store is being opened by Texas-based technology entrepreneur and fashion fan Jodi Shelton who has partnered with industry veterans to manage the new venture. This will be the second U.S. store for Jitrois after one in Aspen, Colorado which is operated separately from the upcoming New York unit.
Known for sexy, figure hugging leather apparel often touched with extravagant embellishments, designer Jean-Claude Jitrois' label has been known for decades by a devoted but extremely exclusive clientele, probably a result of the four-to-five figure price tags typically found hanging on the items. The strength of the luxury market particularly in New York has encouraged the label, still privately owned by the designer, to seek out more store locations in major U.S. markets such as Miami and Las Vegas, so you can expect to see more of the Jitrois label around, but at those prices, most of us may be doing more looking than buying. Look for a projected opening in February.