Gotta Go To
...Some Other Mo's

SAVE UP FOR CAB FARE: 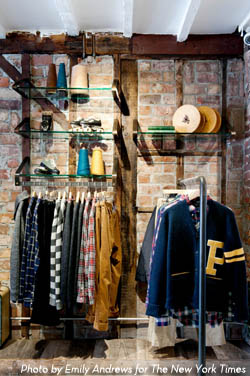 We aren't sure if Critical Shopper Jon Caramanica's look at the WP Store in Boerum HIll in today's Thursday Styles is an expression of his disappointment in the store itself or the neighborhood that surrounds it. That particular Smith Street corridor is where the current wave of gentrification rolling through Brooklyn  originally took root, and yet, our shopper is dismayed that the area, as reflected in the store, is now safe and boring. The WP Store is the creation of Italian Manufacturer WP Lavori in Corso, which licenses and markets upscale sportswear from old-timey labels like Woolrich, Baracuta and Palladium boots and distributes Spiewak, Barbour and Blundstone. By forming retail outlets featuring all of the brands under its umbrella —this is the first WP Store in America— our shopper says the company has created a disjointed store whose whole is less than the sum of its bland parts. "...there’s not much need for adventure here, and there’s not much on offer," he writes "WP Lavori is a store operated by a conglomerate."
Our shopper finds more interesting fare from the non-company owned labels like Engineered Garments and Barena. Apparently the more interesting Mark McNairy designed Woolrich Woolen Mills line, which would seem to be up Caramanica's quirky alley,  has been restricted to the Woolrich Store in SoHo that WP Lavori also runs. Adding insult to injury is the fact that the WP Store has taken over the space once occupied by the much admired Smith & Butler without changing the first piece of decor. The previous tenant was an upscale store that helped make Smith Street safe for less inspiring neighbors like yet another branch of Intermix, but also spoke to the idiosyncratic Brooklyn style that our shopper seems to be searching for. But this is today's Brooklyn. The moment it seems like something interesting is happening, nebulous commercial interests converge and that adventurous spirit moves on, but don't be discouraged. There's still about two thirds of the borough left that has been totally untouched by any kind of coolness, so plenty more ground is waiting to be explored and conquered.