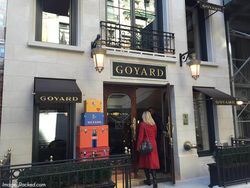 Some brands are so confident in their rarefied appeal that they seem to operate under the radar, secure in their expectation that their savvy customers will find them. Goyard, the venerable French luggage and leathergoods brand is one of them. Earlier this year, some flamboyantly festooned plywood scaffolding went up at 20 East 63rd Street indicating that a Goyard boutique was on the way, but with little announcement as to exactly when it would open or how big it would be. In fact, it was only through Instagram that most of us discovered that the store was being built at all. Tucked away on the side street, it is easy to miss, even from heavily trafficked Madison Avenue around the corner, which is why we didn't notice that the store had opened a couple of weeks ago. Our friends at Racked finally realized that it had opened, and report that the discreet, two level store is very much the hushed, elegant luxury boutique one would expect, expanding the offerings from what is available at its in-store shops at Barneys and both Bergdorf's stores including more pet accessories and custom monogramming options —a must for true Goyard fans.