Sam Flax To Close After 95 Years 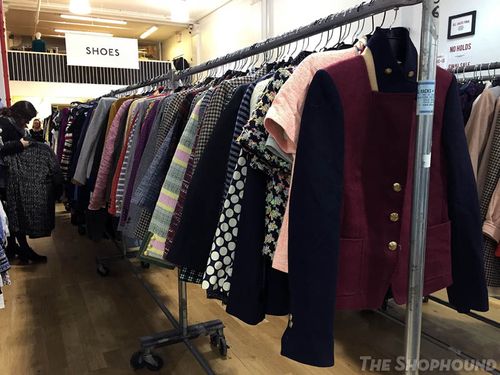 It's the Holiday Season everyone, and it you have survived the onslaught of Black Friday Week/Cyber Monday promotion, then you have arrived at regular old Tuesday and can really save some money at the over 50 sample sales that are scheduled for this month (at least the ones that we officially know of). This week skews heavily toward menswear for some reason, but there are still some bright spots for ladies starting with the event that can reliably get customers to line up on the sidewalks of lower Fifth Avenue, the J.CREW SAMPLE SALE which starts today. As we have mentioned countless times before, better svaings can often be had at J.Crew's in-store clearances offering 30% to 40% off reduced merchandise, but the sample sale offers all kinds of opportunities, mainly because it seems to be composed mostly of actual samples including alternate fabrics, colors and styles that you won't find in the stores. It's a random mix, as we discovered at the preview last night, with most prices at around 60% to 75% off retail. FOR WOMEN, at 260 Fifth, there was a particular abundance of shoes and handbags and while women's main label and Madewell items were carefully organized, there was a vast but wildy varying mix of one-off items of every sort of category priced as marked. Most cashmere sweaters were $90, for example, but the system allows for special pricing for a special piece.
Over at 225 Fifth, the smaller MEN'S SECTION was similarly organized with lots of the label's increasingly popular tailored clothing separates. Prices were fairly decent ($15 tees, $25 woven sportshirts, $90 cashmeres in color order, etc.), but don't count on making a matching suit of pants and a jacket. There was also a strong outerwear selection including down vests and jackets and plenty of overcoats, for now anyway. Accessories were a little bit lacking, but early birds will nab some nice cashmere scarves for a mere $20. Restocking is promised, and reductions can generally be expected before the end of the sale on Sunday but how often and how much remains to be seen. (Have a look in the gallery above)
Of course, that's not all. There are plenty more opportunities to get your Holiday Shopping done this week:

KITON's sale started yesterday at Soiffer Haskin, for the impeccably tailored and deep-pocketed. Reductions have already been taken, but expect to invest some major funds if you want to outfit yourself from one of Naples' finest tailors. Runs though Thursday the 4th.

EDDIE BORGO's modern jewelry will be on sale starting today through Thursday in NoLita. Look for bold pieces for men and women starting at $30.

Starting on Wednesday, two-time CFDA/Vogue Fashion Fund finalist WES GORDON will be offering deep discounts from 60% to 75% off on his women's designer collection through Thursday. Prices start at $100 in the Financial district.

Also on Wednesday, JOHN VARVATOS will return to the Sample Sale circuit at Chelsea Market through the weekend. There was once a time years ago when Varvatos held frequent sample sales, but then he stopped holding them altogether and became a frequent presence on flash sale sites like Gilt and RueLaLa. Who can say why strategies change, but Varvatos is back on the scene. Expect to find his apparel collections and plenty of shoes.

Another CFDA favorite, OVADIA & SONS will be holding their sale in their SoHo showroom on Thursday and Friday featuring their modern classic menswear along with shoes, accessories and various other objects of inspiration.

The quirky team behind upstart menswear label ORLEY (yes, another CFDA/Vogue finalist) are holding what we think is their first sample sale starting on Friday through the weekend. Look for bright colorful USA made knitwear and sportswear from previous seasons at up to 80% off.

Flamboyant shoe designer SOPHIA WEBSTER will be offering some alternatives for women over the weekend in the West Village. Look for her highly embellished footwear starting at $70.

If all that isn't enough, this weekend marks the return of CAPSULE MARKET SQUARE at Center 548 on West 22nd Street. The trendsetting trade show has created a special edition open to the public for the second year featuring booths from coveted designers most of whom use the opportunity as their de facto sample sale. Last year we saw great buys from MARK MCNAIRY NEW AMSTERDAM and NAKED & FAMOUS among many other Capsule Show stalwarts. Those designers are returning along with MAISON KITSUNÉ, WANT LES ESSENTIALS de la VIE, GOLDEN GOOSE, MASSIMO ALBA, VANESSA BRUNO, VIANEL and may others totaling 100 participants. It's a can't miss for cool shoppers, the coolest of whom will be getting first crack at the goods by buying tickets for the VIP shopping session on Friday night. Saturday and Sunday will be fully open to the public.

There's plenty more this week from TOCCA, NICHOLAS K, BEN-AMUN, NEST, ST.EMILE and much more. Keep an eye on the SALE ROLL at left for details and the inevitable late breaking sales that will appear without notice.