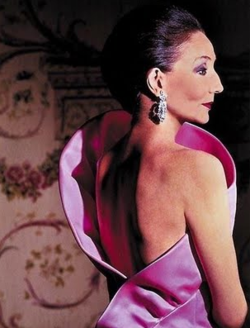 If you can think past this Spring's upcoming Chinese extravaganza at The Metropolitan Museum of Art's Costume Institute, then mark your calendars for next November when it the Anna Wintour Costume Institute galleries will be devoted to the legendary French aristocrat and socialite Jacqueline, Comtesse de Ribes.
Get ready to gaze at some spectacular couture.
Though her profile has been lowered in recent years, Comtesse de Ribes, now age 85 (though, to her, it would probably be most unseemly to discuss such things),  is a socialite of the old school who was a central fixture on the international social scene for decades through the 1990s. Born into nobility, she is the sort of woman who was raised to wear haute couture, and wear it she did, becoming a muse to designers like Guy Laroche, Valentino, and, most prominently Yves Saint Laurent in the days when being a muse meant being a good customer, rather than signing an endorsement contract. Her comings and goings were chronicled by social columns and publications like WWD and the original broadsheet version of W, and she has been considered one of the world's best dressed women for most of her adult life. A muse not only to designers, her elegant profile has been photographed by Richard Avedon, Irving Penn and pretty much any other photographer of note in the 20th century.
She was famous enough for her style to launch her own prêt-à-porter collection in 1983, giving her the opportunity to become her own best model as in the image above. Always an expensive niche label for the most exclusive stores, the line continued for 11 years until 1994 when she closed it citing health concerns.
Sadly, there is no gala party planned for the opening of her exhibition, as her appearances at Met Balls were among the most anticipated, especially during the pre-Vogue sponsorship era when it was really the party of the year for New York's social set before it was hijacked by Hollywood. Instead, we will get a glimpse into the wardrobe of a woman whose style helped develop some of the world's greatest designers.