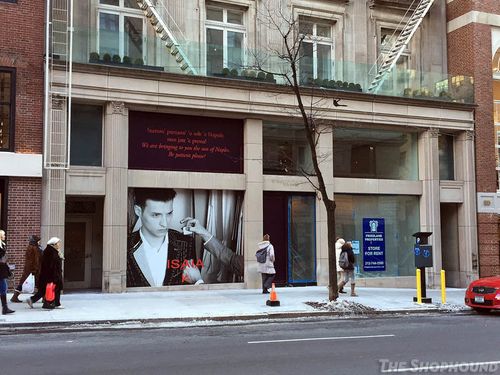 Now we can finally report about something that's going to open rather than close. The sign in the window of Donna Karan's former home at 819 Madison Avenue tells us that it is in the process of becoming the new home of Neapolitan luxury menswear label Isaia. As the sign says:

So far, little other information is available about the upcoming store other than it appears to be the label's first North American standalone boutique, so we should probably expect a showplace. Over the past decade or so, Isaia has grown its U.S. business substantially, and its little red coral logo can now be found in Barneys, Bergdorf's, Saks, Neiman Marcus and about 30 or so of the country's best specialty stores. Known for its impeccable hand tailored men's clothing and shirts, the new store will form a luxe menswear mini-district of sorts with Lanvin's and Bottega Veneta's men's shops as well as fellow Neapolitan Cesare Attolini all within a couple of blocks of each other. Sadly that other esteemed import from Naples, Luigi Borrelli has closed his shop at nearby 790 Madison, so fans will have to look elsewhere for those handmade shirts, but, for now Isaia and Attolini will have to represent southern Italy's renowned sartoria on Madison Avenue's most luxurious stretch.