There was so much going on this past weekend what with the Saturday Night Live anniversary and some Basketball thing, but, there was also Fashion Week and, as always, the first few days are still heavy on Menswear in advance of the guys finally getting their own week to themselves this Summer. One wonders if, once a bigger spotlight is shining, designers will get more room to show off. On Wednesday, we visited both sessions of New York Men's Day at Industria in the West Village, which was a great showcase for up and coming (and in some cases, old and revamping) labels, but kind of crammed them into some small, hot, brightly lit rooms. On Saturday, General Idea, a Fashion Week stalwart from designer Bumsik Choi, got Industria all to itself. Choi is one of the designers who is quietly making Seoul a fashion capital to reckon with, and has developed a faithful cult clientele. Typically, Choi has opted for a runway show, but this season he went for a more efficient presentation where visitors could examine his collection in a bit more detail. As always, bold outerwear was the standout including double lapeled coats that made a striking diagonal slash of contrast across their wearers. One irony was that despite the presentation being staged in an actual photo studio, the lighting was unusually dim, making for a strangely gloomy ambiance, but perhaps they were simply trying to mitigate the inevitably unfavorable combination of heavy wintercoats and bright lighting in a smallish, white room.

Later in the day, we made our way to Robert Geller's show at Pier 59 Studios. Last season, Geller moved to a bigger studio in the complex with an X-shaped runway that beautifully showcased the collection, but for Fall 2015, he moved back to his familiar long, narrow studio for a proscenium-like set-up against a chain-link backdrop. How it related to Geller's inspiration, Aldo and Nedo Nadi, a pair of brothers form the 1920s who were Olympic level fencers, and, apparently, extremely natty dressers. As he does, Geller melded inspiration from the past to modern techniques for a striking collection, though, again, the dark, moody lighting made it tricky to get a handle on exactly what one was seeing, even from a decent seat. We hear that there were great shoes from Common Projects, but they mostly obscured to us. Maybe next season's Men's Fashion Week will give both designers better showing options in a less tightly packed schedule. They both deserve the lights on a full power. 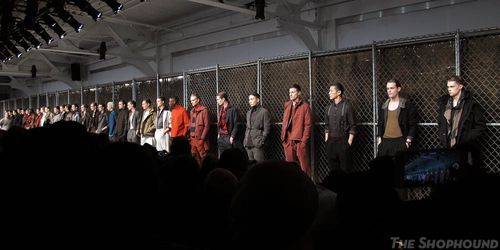