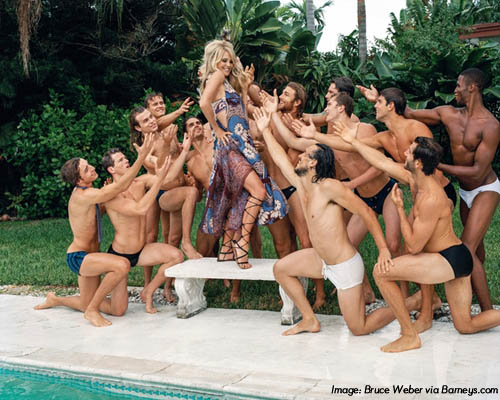 Barney New York launches its Spring advertising campaign today with a spotlight in today's New York Times on the Bruce Weber lensed story "Better Than Ever" about veteran fashion models surrounded by hot young hunks. The glamorous diva surrounded by scantily clad (and sometimes not clad at all) men is a time honored editorial trope found over the years in campaigns from Valentino to St. John Knits, but the twist here is the notable age difference between the guys and the models including Brooke Shields, Christie Brinkley, Pat Cleveland, Stephanie Seymour, Kiara Kabukuru, Bethann Hardison and Kirsten Owen. 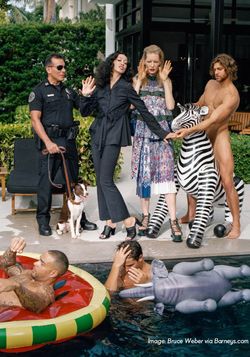 At 39, Kabukuru is hardly a senior citizen, but she's probably at least 15 years older than the speedo-wearing guys swirling around her. And Brinkley, who is at the center of the article, is a remarkably well preserved 61 years old. If anything, the campaign is a tribute to good skin care and highly effective cosmetic procedures —there's no possible way that Brinkley looks like that without had some work done, even if it is very, very good work— but the most remarkable aspect of the concept may be Barneys  recognizing that the vast majority of its female customers are well past the ingenue age and more likely to be over 40, 50 and often 60 years of age. After all, it is usually older women who have financial resources to seriously shop at stores like Barneys, and as much as designers and retailers like to aim for a "young" or "dynamic" customer, the reality is often far different, whether they want to accept it or not.
Which brings us to the new campaign, a poolside frolic featuring a few stylishly dressed mature ladies and a flock of young male bathing beauties. Of course, never mind that if the genders were reversed, feminists would be up in arms over the recalcitrant sexism, on a day when the newly unveiled Sports Illustrated Swimsuit Issue model appears to be actively removing her bikini bottom in a way that cannot be shown on morning television, this is actually fairly tame stuff. While Christie Brinkley has been a celebrity model since she was an SI cover girl in the 1980s, Pat Cleveland is an industry icon, and Brooke Shields was a teen superstar actress, but some of the other ladies like Kabukuru and Owen have been working steadily on high fashion shoots, and aren't really considered "mature" or "classic" models as agencies generally refer to their over-40 category. The Supermodels of the 90s, all now in their 40s, still do the occasional runway show as guest stars, but not novelty acts (see Amber Valetta and Eva Herzigova closing last month's Atelier Versace couture show). Though Barneys is playing up the decadent party aspect of the campaign, what is behind it, whether acknowledged or not, is a recognition that the women who end up wearing expensive clothes are more likely to be Brinkley's age than that of the 28 guys surrounding her.
Oh and those guys, well, they are there to remind you that this is a Bruce Weber shoot. In a video embedded In the Times' story (we are trying to get it on the page here for you) there is more than equal time given to their torsos, so the rejection of youthful beauty is maybe just a little disingenuous. It may just be gender reversed —for the moment.

The Fine-Wine Theory of Fashion Advertising By Matthew Schneier (NYTimes)

Better Than Ever: Christie Brinkley "Smile" from Barneys The Window on Vimeo.

And here's another from Style.com: