Hermès Is Out And Diptyque Is In At Grand Central Terminal 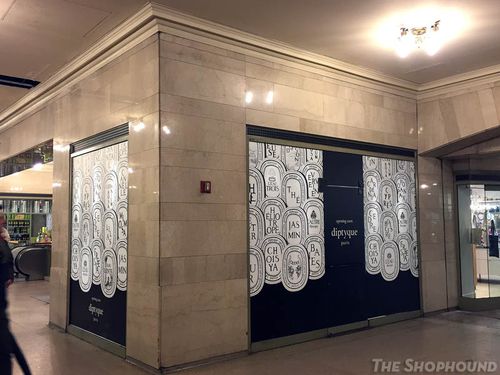 As promised, the Hermès Silk Bar has taken its leave of Grand Central Terminal's Lexington Passage. It didn't seem all that outlandish anymore that the luxury brand might stick around a littler longer, but it looks like the folks there are happy with the strategy of staging pop-up stores in various places art round town periodically rather than opening small permanent stores, so farewell, Hermès. You definitely classed up the joint.
Francophiles shouldn't feel too bereft, however. The telltale black and white montage of labels in the window tells us that the next resident of the well exposed corner shop right near the Grand Central Market will be popular Parisian candle and fragrance maker Diptyque. No word on whether this is a permanent or pop-up location like its predecessor, but, typically, landlords like permanent tenants, and with its luxurious image but still more accessible price point, Diptyque fits in easily with neighbors like Tumi, MAC and Jo Malone. No opening date has been announced, but it's a good bet that it will open by Mother's Day at the latest if not earlier.

Previously:
Commuter Luxury: There Is Now An Hermès Store In Grand Central Terminal