Michael Bastian Is Done With Gant,
But His Uniqlo Line Is Back
—Now With Shorts & Tees 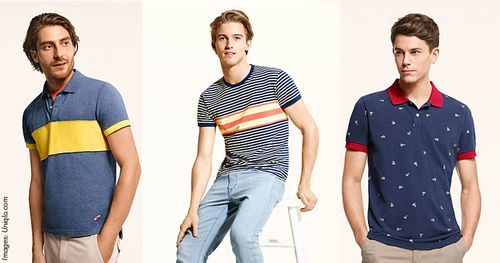 Michael Bastian
fans were disappointed when they learned that last Fall would be the final season for his collaboration with Gant, leaving them only with his main collection which is beautiful, but, even by the designer's own admission, often staggeringly expensive. They may have forgotten for a moment about the designer's other much more affordable team up, his Spring polo shirt collaboration with Uniqlo. Well, it's Spring now, and yesterday, Bastian tweeted an announcement that a new batch polo shirts are back at Uniqlo, and they come with some welcome surprises. Now that the Gant line is over, the (apparently) annual collaboration with Uniqlo has broadened a bit. Last year they added kids polos, and now the assortments include men's t-shirts and tank tops is Bastian's signature stripes. Still not enough? Shoppers who like a total look will also discover two new styles of shorts, a rugged bush short in four solid colors and a cargo in a camo print that upon closer inspection reveals itself to represent a a cunningly designed cloud and bird pattern. We haven't yet gotten a chance to confirm that the collection is in stores yet (it wasn't as of Sunday), but it's on Uniqlo's e-commerce site right now.
While it doesn't quite replace the already missed Gant collection, we are all for any opportunity to get an affordable piece of Bastian style, and this year the prices run from $19.90 for kids polos to $29.90 for the shorts. Get 'em while you can. The best pieces always have a way of selling out fast, and let's hope there's more to come from this team-up —maybe a Fall edition? Just asking.