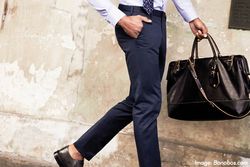 At some point, the city will thaw out, the disgusting, weeks-old slabs of snow on the side streets will melt away and it will be summer at which point, New Yorkers will discover a huge new Bonobos store on Fifth Avenue and 17th Street. The New York Post is reporting that the fit-obsessed menswear brand has signed on for 4,000 square feet at 95 Fifth Avenue for a new store expected to open in June, which would suggest that it is taking over the Kenneth Cole store that has made its home there for several years.
This will be the label's third New York "Guideshop" including its first showroom at the company headquarters nearby on 25th Street, and its more public Crosby Street outpost, but at 4,000 square feet, it will be a dramatically bigger flagship than any of the other 14 stores it runs. Typically, a Bonobos guideshop carries almost no merchandise to sell in person, but plenty of sizes and stock for customers to try on and order, a concept that stems from the brand's beginnings as a resource offering several different trouser models to insure a perfect fit. It's a counter-intuitive way to run a retail store —more of a showroom, really. The brand's success over the past few years has allowed the company to expand into more varied product categories, and, as Bonobos CEO and founder Andy Dunn tells the Post, “This Fifth Avenue Guideshop is our first real flagship. This will really expose our customer to the breadth of assortment we have [in] tailored clothing, shirts, suits, outerwear.” In fact, suit and shirts have now eclipsed the famous pants in the company's product offerings, and, with a store about four times the size of its usual ones, one wonders if Bonobos may finally give in and stock the store with cash and carry merchandise —especially since it will be cheek by jowl with J.Crew, Banana Republic and a host of other clothing stores on one of Manhattan's busiest retail corridors. Even though Summer seems like it will never happen, June is only a mere three months away, so we will find out soon if this flagship will show that Bonobos is ready to open a more traditional retail store.