What Got The New President Of Saks Fifth Avenue Fired After 15 Months? 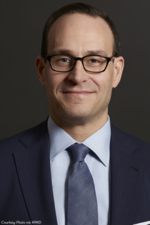 Saks Fifth Avenue surprised the fashion and retailing industry yesterday afternoon by announcing that its new, high-profile president, Marigay McKee, had left the company and would be replaced by Marc Metrick (pictured right), executive vice president and chief administrative officer of the Hudson’s Bay Co. A year and a half ago, hiring McKee's away from Harrod's in London was considered a coup for Saks which had just been acquired by HBC. She was unafraid of making herself the face of the retailer, and enthusiastically vocal about her plans to upgrade the chain's stores with a higher luxury quotient to better compete with rival Neiman Marcus —particularly the Fifth Avenue flagship, which seems to be continually in a state of reconfiguration and renovation. McKee seemed almost like a throwback to flamboyant merchant princes like Marvin Traub of Bloomingdale's or Stanley Marcus who ran their companies with a hefty dose of dazzle dazzle.
So why did HBC's glittery new hire go sour so quickly? In today's post-mortem in WWD, David Moin seems to suggest that it was not her professional abilities but her management style that got her canned. According to unnamed sources, McKee stepped on many toes which led to the departure of too many valued longtime Saks personnel including most prominently chief merchant Jennifer De Winter who recently decamped to Tiffany. McKee is described as a not a "good fit" for the store, and as someone whose office frequently saw people leaving in tears after meetings with her. This, apparently, made it difficult to attract new talent to replace fleeing, formerly stalwart personnel who became attractive to other companies, a state of affairs that should be corrected with her departure as searches for several executive positions are under way.
And yet, it's hard to imagine that it was only management style that caused her dismissal. There are plenty of celebrated fashion and retailing executives whose management antics make industry insiders shudder. Was there something more behind McKee's firing? HBC executives stress that the extravagant $250 million re-imagining of the Fifth Avenue flagship store would proceed as planned, although McKee's vision included radically reconfiguring several floors including creating two-level in-store boutiques for luxury labels that would rise from the main floor to the second. A dramatic renovation like that including other plans for the building would likely cost quite a bit more than $250 million in New York City and put the store in a state of construction for years at a time. While Saks has real problems appropriately configuring its space, particularly on its over-packed main floor, that solution might have been overly costly even for HBC which is committed to investing in the store's redesign. McKee's other initiative was to cull the store's vast matrix of vendors and cut loose the brands that weren't making enough profit for the store, but a year into McKee's tenure saw Saks's flagship packed with merchandise, with every possible nook and cranny of the selling floors fitted with a rack for full-priced goods. For a store supposedly devoted to paring down its brands, it looked more like they were buying every possible label they could and throwing them on the floor to see what stuck with customers, as opposed to the strategy of a seasoned merchant carefully crafting an upgraded fashion image. Contrary to increasing the luxury quotient, it made Saks feel more like a moderate department store full of racks —not the best way to compete for customers looking for the most upscale shopping experience.
As for her replacement, Marc Metrick was a 15-year veteran of Saks before he came to HBC three years ago, so he comes with the longtime understanding of the store and its culture that McKee lacked. He is not, however, a merchant, but he looks exactly like the kind of person who is often brought in to steady a ship that has been rocked a bit too hard. So HBC's grand plans to strengthen Saks against its rivals has hit a delay, and the clock is ticking. While Bergdorf Goodman has always been the main store Saks vies with for customers in New York City, its two biggest competitors nationwide, Nordstrom and Bergdorf sibling Neiman's, are headed to Manhattan within the next few years. By then, Saks will have had its second store in the borough open at Brookfield Place in the Financial District. What it needs right now is the right merchant to get it ready for the influx of competition.

Marc Metrick In, Marigay McKee Out at Saks By David Moin (WWD)

Not only was she abusive to employees she was completely incompetent as a business persons in understanding multi store retailing. She completely destroyed the culture of the company. Good riddance to her, there is dancing in the office.