Pearl River Mart To Shutter In SoHo As Rent Quintuples 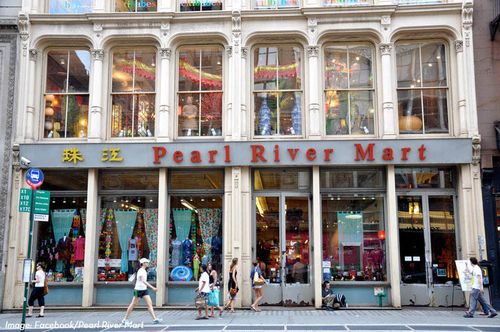 It's an old story, but no less distressing  each time it plays out. Pearl River Mart, a SoHo institution famous for inexpensive but often surprisingly stylish Chinese imports, is set to close its store after 44 years of business as its rent on Lower Broadway is set to increase fivefold when the current lease expires at the end of this year. Pearl River currently pays over $100 thousand per month for three levels of shopping over 30,000 square feet, and it has been in the location since 2003, when it moved from a smaller, dustier space at the corner of Canal Street and Broadway. When the store moved to Broadway between Broome and Grand Streets, the trendy shopping district in SoHo ended abruptly at Broome Street. South of that border was mostly relegated to local sneaker and streetwear stores, and bargain resource Pearl River was actually upgrading the neighborhood. Since then, SoHo has become an even hotter destination, and chains like Muji, Topshop, Madewell and CBR to name a few as well as home-grown phenomena like Opening Ceremony have pulled customers south on Broadway sending rents soaring. If you think that a five-fold rent increase after only twelve years is excessive, then you are right, but it shows you how aggressive New York City landlords have become in making sure that they are maximizing revenue from all of their properties regardless of how it affects presumably good tenants.
As of yet, Pearl River does not have a replacement location lined up, and, according to Crain's, and will shift its business to an online platform. The building's owner claims to still be negotiating with Pearl River to remain, perhaps on upper floors, but the store's owners are looking to head closer to its origins in Chinatown, possibly to space below Canal Street where the rent would be in the $90 per square foot range. Still, leaving its now lavishly spacious digs on Broadway will likely mean that the store will have to trim its inventory of over 17,000 different items. Hopefully, Pearl River won't have to move too far away. Once a best kept secret of fashion stylists and downtowners, many Manhattanites have found themselves exploring the vast offerings there while stocking up on basic kitchen items or bamboo chopsticks or classic but affordable blue and white planters or any number of other popular items of Asian origin. It's one of those places you don't find everywhere that makes shopping in New York that much more special.