Half Of A Pair Edition

THE MYSTERIES OF PARIS:

Can Paris' Colette Save McDonalds? 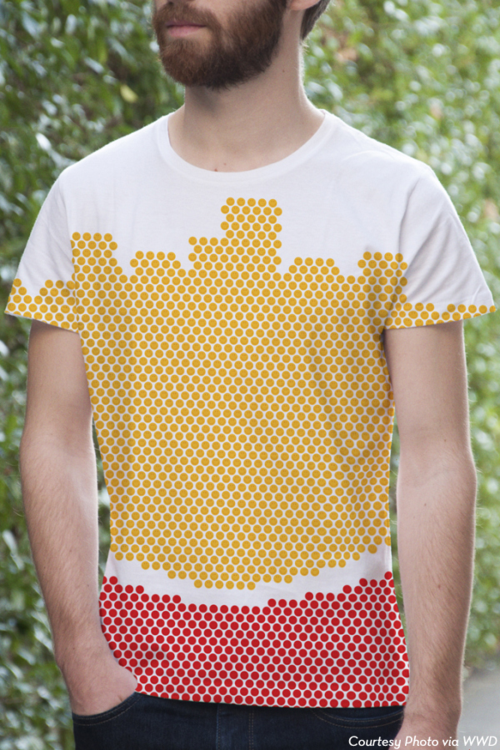 A look from the upcoming collaboration between McDonald's and Colette

Sometimes the French are inscrutable.
We all love a high-low collaboration, but most of us would draw the line when it comes to fast food. Not so for the famed Colette concept boutique in Paris. The store is teaming up with the international burger chain for a collection of clothing and accessories featuring graphic designs that were featured on a McDonald's campaign last year in by TBWA Paris. The pictograms of signature McDonald's fare like a Big Mac or French Fries are so abstracted that you might not even recognize what they are or connect them with the chain, but then there's that telltale red, yellow and white color scheme that sends us right into a line to order a serving of large fries while hoping we don't run into anyone we know.
As a fashion authority, Colette has been known to possess the ability to confer coolness upon brands that are either unknown or may have been overlooked in the past. It is the first stop for entrepreneurs looking to relaunch a revamped heritage designer brand, and retail buyers visiting Paris from around the world are still known to take notes on the store's offerings to add excitement to their own stores back home.
But will Colette be able to work its magic on McDonald's, whose business has been on a stubbornly downward trend recently as casual diners seem to have finally given up on its pedestrian burgers and even its French Fries no matter how reliably tasty they may still be. Perhaps this is an example of differing brand perception from continent to continent. While McDonalds may be seen by some as mundane and greasy here in the States, in Paris, the brand seems to be able to muster up at least enough irony or camp to be embraced by the fashion avatars at Colette. will it be enough to add sum luster to McDonald's currently dingy reputation? It's too early to tell. The line will not go on sale until May 4 through the end of the month. Americans will have their chance to order them from the store's website, but without the opportunity to add on an order of Fries —and we al know that they are the best part.