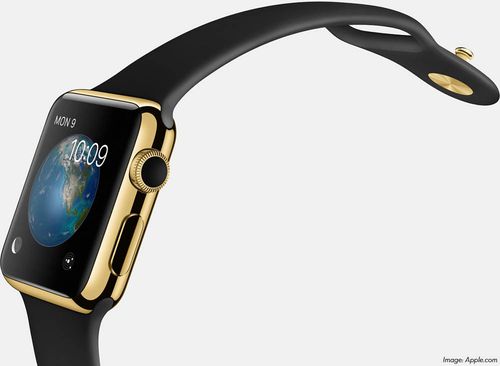 The long awaited Apple Watch hits stores today, but just to look at.
If you are thinking of having a closer look at the luxury Apple Watch Edition, don't think you can just wander into any Apple Store and stroll up to a table to get your paws on it. All viewing for the luxury model is by appointment only, which can be set up here. While there were rumors that Apple was in discussion with prominent luxury retailers to launch the watch, it looks like the gleaming gold version will not be available at Colette in Paris where an exclusive preview party was held during Paris Fashion Week in October or at any other third party store except for Selfridges in London, Galeries Lafayette in Paris and Isetan in Tokyo which all have permanent leased Apple retail stores under their roofs. The Edition model will be restricted to only 53 select Apple stores worldwide for the launch. According to AppleInsider, only 21 of those locations are in the U.S. including the Fifth Avenue flagship, SoHo and Broadway and 67th Street on the Upper West Side. Most of the other locations are concentrated on the East and West coasts with the exceptions of two Chicago Area stores and one each in Dallas and Houston. Internationally, the Edition model will be sold only in Canada, Australia, the U.K., France, Germany, Hong Kong and Japan at no more than three points of sale in each country. In all of continental Europe, only five stores will have it, which is a tiny breadth of distribution compared to other luxury watch brands. The only other country with more than three points of sale for the Edition will be Mainland China which will have it in 12 of its 19 Apple stores in addition to all three Hong Kong stores.
More than any other product launch in the past, Apple is encouraging hungry customers to pre-order all models of the Apple Watch online. There will be no stock available for walk-in customers when the watches officially hit the market on April 24th, so don't look for lines around the corner forming in the days before the 24th. This should be a disappointment to the legions of alleged gray-market cash purchasers we saw last Fall when the iPhone 6 was released, who may be part of the reason behind this policy. As of this morning, pre-order supplies for the launch day were swept up within minutes of becoming available online. Ship times for back orders are already at four to six weeks and are expected to go higher before the end of the day. If you haven't already secured one, then you should prepare to be very patient.