Want To Buy An Apple Watch
At The Apple Store?
Wait Until June, Maybe July 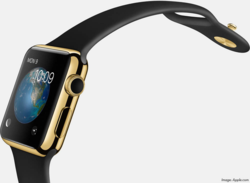 Basically, there is no product launch this season that can compare with the Apple Watch.
It has captured the imagination of the gadget-buying public like nothing else, and it though it will start shipping next week for an April 24th delivery to lucky early bird pre-orderers, we won't see it in stores for at least a couple of months. Anyone who thinks that they can line up outside the city's various Apple Stores to get first dibs will be sorely disappointed come next Friday, and if you see someone trying, you are now officially allowed to taunt them and throw things at them.
Well, maybe not throw things, but feel free to tell them not to waste their time.
No less credible a source than Angela Ahrendts, Apple's head of retail, sent a memo to employees this past week informing them that there would be no stock available for walk-in customers on the 24th, and there probably wouldn't be any until June, possibly July —which is why the company has been previewing the new line in stores before it becomes available to purchase in person. She writes in the memo, reprinted by The Telegraph,

"It's important to remember that Apple Watch is not just a new product but an entirely new category for us," she wrote. "There's never been anything quite like it. To deliver the kind of service our customers have come to expect — and that we expect from ourselves — we designed a completely new approach. That's why, for the first time, we are previewing a new product in our stores before it has started shipping."

Supplies are reportedly so tight that pre-ordering after an in-store examination may be the only way to buy the watch from an official outlet for months to come, perhaps until it is time to launch the inevitable Apple Watch 2 .One result of this will likely be discouraging the alleged straw purchasers who clogged lines outside stores last Fall when the iPhone 6 launched. It is widely believed that these customers, willing to wait in extensive lines repeatedly, were diverting their purchases to international gray markets where the phone was not yet available. Ahrendts, however does not make mention of this in her memo, rather stressing that a unique new product needs to be rolled out in a slow and controlled manner. There is also no suggestion that this will become the new standard procedure for other launches, so when the presumed new iPhone (6S? 6C?) is released this fall, we can reasonably expect to see a return to the familiar sight of lines of customers sweeping down the sidewalks.