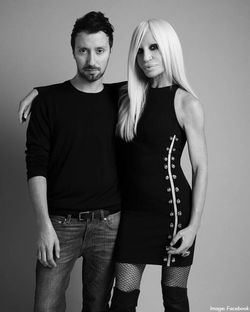 Remember Moods of Norway?
Nobody else does either.
That's why the Scandinavian brand closed its two-year old store at 75 Greene Street last year which left it open for Versace to swoop in and ink a new 10-year lease for the 4,300 square foot space. It's a prime spot in SoHo between Spring and Prince streets, but, wait, doesn't Versace already have a boutique at a prime spot on the designer laden block of Mercer Street between Prince and Houston Streets? Indeed it does, and there's no indication at the moment that its lease is up yet.
It looks like Versace has a second store in the works not too far from it's current one, and while it's possible that there will be two full Versace boutiques only a few blocks from each other, a couple of likely options come to mind: One would be separate Men's and Women's boutiques in SoHo as Dior has in the area and Ralph Lauren, Bottega Veneta and Lanvin have on Madison Avenue. The other, more interesting possibility would be a first New York boutique for the Versus Versace collection which is currently under the creative direction of up and coming designer Anthony Vaccarello (pictured above with Donatella Versace). Once a diffusion brand, Versus has now taken on more of a laboratory position in the company meant to nurture emerging design talent. SoHo would be an appropriate location to promote the division in the U.S.
Of course, this is just speculation. All we really know for sure is that Versace has leased the space for something. We'll be keeping an eye out for the official announcement of exactly what it will be.