The past 20 years have brought a bonanza of grocery shopping to New York City where we once complained of having the worst grocery stores anywhere. Cramped, expensive and low in selection, New York City's grocery stores were notoriously sub-par, and city-dwellers with access to a car would regularly brag about driving to New Jersey or Long Island for real grocery shopping, but then Whole Foods arrived in Chelsea in the late 90s. Shoppers clamored to it like it was an oasis in the desert. After a few years, it had opened some of its largest stores in the chain in Manhattan, and it continues to look for suitable locations in the city. Then Trader Joe's arrived, now with five city locations, and Fairway started expanding throughout the city with stores much more efficiently designed that its still problematic original Upper West Side store. Grocery shopping is still too expensive in New York City, but at least the stores have improved in quality and size. Still, there was one holdout that suburban shoppers spoke of with reverence: Wegmans (pictured above). Often rated as the best grocery store in America, Wegman's, known for its reasonable prices and broad selection, stretches throughout the Northeast all the way down to Northern Virginia, but has bypassed the city until now. Yesterday the chain announced its first New York City store to open in 2017 as part of the redevelopment of the Brooklyn Navy Yard (rendering pictured below). Chosen in part because of its promise to prioritize hiring in the surrounding neighborhood, Wegmans emphasis on prepared foods also requires a expanded staff ensuring even more local jobs to be available. Though the 74,000 square foot store will be about 25% smaller than the average Wegman's location, and the smallest in the chain, it will still be larger than the sizable Fairway in Red Hook or the Whole Foods in Gowanus which is also quite large. We all have a couple of years to prepare, but we can already picture the crowds including Manhattanites caravanning to Brooklyn to get to Legman's. Start your shopping lists now. 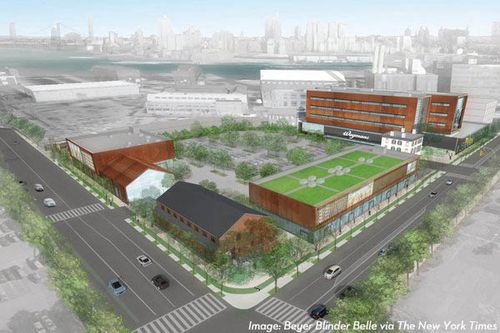