China: Through The Looking Glass
Is Another Costume Institute Hit 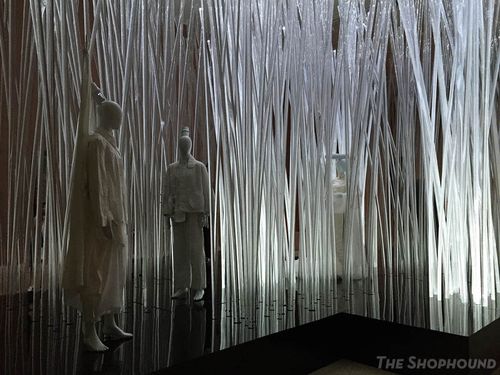 You have seen all of the slinky, see-through gowns and crazy headpieces from the Met Ball, but sometimes the actual exhibition that is being celebrated can get lost in all that partying. Not this year. While it is a challenge for the Costume Institute at the Metropolitan Museum of Art to keep topping itself with its blockbuster spring shows, this year Curator Andrew Bolton has pulled out all the stops with China: Through The Looking Glass, its collaboration with the Met's Department of Asian Art which opens this Friday. The Shophound got a preview on Monday, and we can't wait to go back to see it again. Since being announced last year, the show has undergone a title change (formerly Chinese Whispers: Tales of the East in Art, Film & Fashion) and expanded to 30,000 square feet including both the Anna Wintour Costume Center galleries as well as the entire Chinese galleries on the museum's second floor. The whopping show, unprecedented for the Costume Institute, is about three times the size of the department's typical spring shows according to Bolton, and its expansiveness is justified by some of the most striking installations the museum has ever seen. The celebrated Chinese director Wong Kar Wai served as the show's creative director, and his input is felt in the mesmerizing, cinematic way the exhibition unfolds with a deliberately disorienting "Through The Looking Glass" sense of fantasy. Each section is punctuated with carefully selected film clips ranging from Cinema's first Asian screen goddess, Anna May Wong, who had to move to Europe to escape steroptyped roles in American movies, to Bernardo Bertolucci's The Last Emperor, to clips from Mr. Wong's own classic films like The Grandmaster and those of his contemporaries like Zhang Yimou's House of Flying Daggers and Raise The Red Lantern to a jaw dropping clip from Vincente Minelli's 1946 Ziegfeld Follies featuring Fred Astaire in a Chinese inspired dance number that is only slightly less offensive than his famous blackface "Bojangles" tribute in Swing Time —but that's really what the show is about. It's not just the spectacular Chinese-inspired gowns and jewels that are the showpieces, but the ongoing interplay of Chinese aesthetic filtered through Western sensibilities that creates a fantasy of China that has been constructed by both sides equally. Rather than seeing a bastardization of pure Chinese culture, which has been a common point of view of politically correct scholars in recent decades, Bolton and his collaborators take the often highly commercialized fantasy vision of China as its own form of artistic expression that leaves room to discuss things that have rightly raised the hackles of many Chinese like Fred Astaire in truly dreadful "Oriental" makeup, or the controversy created when Yves Saint Laurent named his blockbuster perfume Opium, romanticizing not just addiction but the Opium Wars of the mid 19th Century.
Ultimately, it's doubtful that Saint Laurent's perfume got anyone addicted to narcotics, and the curators leave the abundance of dazzling images they present up to the viewers' own interpretations —and dazzling they are. In some ways, the show focuses on some of the usual suspects, devoting an entire room to Saint Laurent's lavish 1977 Chinese-inspired Haute Couture collection and filling the now darkened and spooky Astor Court with pieces from John Galliano's extravagant 2003 Haute Couture collection for Dior. There is plenty from those two, who may have the most pieces in the show along with famous looks from Alexander McQueen, Chanel, Valentino, Balenciaga, Ralph Lauren, and several pieces by Tom Ford YSL that paid homage to the '77 Haute Couture collection. Vivienne Tam's ironic Mao-printed dresses are also given prominent exposure (pictured in the gallery below), but the real discovery is Chinese designer Guo Pei whose gilded ballgown commands a room full of Buddha sculptures all by itself, and who has already been lifted to a new level of cultural significance by dressing Rhianna at the ball on Monday night.
Ultimately the exhibition is more than the sum of its parts. British designer Craig Green's black and white warrior outfits might not mean quite as much if they weren't placed in a breathtaking forest of perspex stalks meant to represent bamboo in a room devoted to Wuxia or "Martial Hero" films (pictured above). Over that past few years, the Costume Institute has tackled themes like Punk and Superheroes with mixed results that often seemed either forced or facile, but this time, they hit the right balance of breathtaking images with depth and history underneath for visitors to find. Plan your visit carefully, and prepare for some long lines. China: Through The Looking Glass has raised the bar again for the Costume Institute's annual blockbusters.

China: Through The Looking Glass starts Friday May 7 through August 16th at the Metropolitan Museum of Art, 1000 Fifth Avenue at 82nd Street, Upper East Side 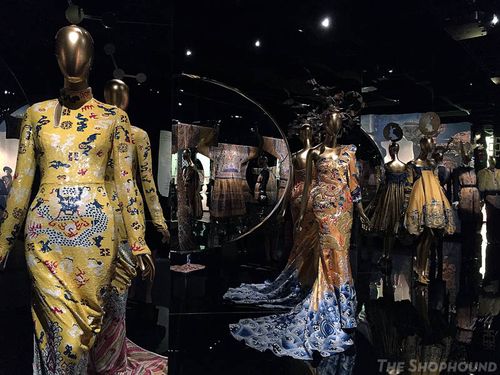