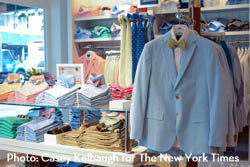 In today's Thursday Styles, our Mr. Critical Shopper, Jon Caramanica, is kinder than we might have expected to the resolutely preppy Vineyard Vines store that recently appeared on what he calls the "lower Upper East Side". It's a brand that offers not so much fashion, but a particular style that remains constant and generally included pink whales on a kelly green background in some form or another. "... it is a label that offers the veneer of dignity in undignified situations: the beach cookout, the college football tailgate, the frat rager, the 9:30 a.m. marketing meeting," he tells us as he proceeds to describe the allowing shirts in a colorful but just a little washed out color palette, toeing the preppy line of not wanting anything to look too new or fresh. The "five-alarm leisurewear" apparently takes classic northeastern summer/weekend wear and gives it just enough of a jolt to look fresh not to jump start the recently completed classic American trend, but to attract the eye of those who never really stopped dressing like that, but there really is no in-between with this stuff. You are either a patrician devotée like Walter Cronkite, Colin Powell or John Kerry whose testimonials hang on the shop's walls —which should give you some idea of the age of the target customer— or you avart your eyes when passing by. We can't say for sure that our shopper this week is truly one of the latter group, but we have read enough of his reviews by now to be pretty certain that he is not one of the former at heart.