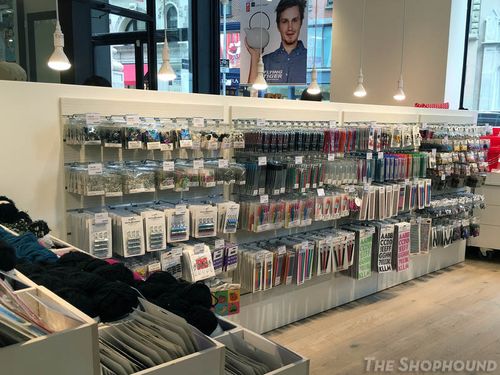 This week's Thursday Styles presented The Shophound with an unusual coincidence. Just as we were about to post our review of the new Danish import tchotchke shop Flying Tiger in the flatiron district, Critical Shopper Molly Young filed hers.
Spoiler Alert: Our opinions do not differ that much in this particular case, but we have a lot more pictures to post without any usage or rights concerns, so feast on our gallery below for a better look at just a small sampling of the delightfully cheap crap the store offers.
We both found the layout maze like, with Ms. Young likening it to a smaller version of fellow Scandinavian Ikea's similarly circuitous store plan. "Working your way through Flying Tiger, you get the sense that a bunch of lunatics in Copenhagen has been given unlimited access to Chinese factories and the mandate to “design a bevy of fun crud” for global distribution," she writes.
The sheer randomness of the company's offerings accounts for most of the shop's appeal, helped in no small part by the low prices with most items below $5 with many at $2 or $3. It's the perfect store for someone with too much time on his or her hands and too little money. It's a magpie's delight filled with shiny stuff, most of it useful, but none of it plain. There are desk accessories, tabletop supplies, crafting gear, candles, eyewear, magnets, drinkware, pens and pencils and tons of other mundane stuff that some design department in Copenhagen has jazzed up with bright colors, flowers, strawberries or an animal motif. It's all too cheap to worry about whether or not any of it is in good taste, and that's the point. While our shopper likened it to Ikea, The Shophound was reminded of the kind of humble variety stores that have long since been obliterated existence by the Walmarts and Targets of the world —the kind of place you might go if you needed some paper napkins, wrapping paper, a stapler, some needles and thread and some notebook paper without having to go to more than one store. Flying Tiger seemed to us like the slightly tipsy version of such a long lost place, and judging from the long line of customers waiting to pay on a steamy Tuesday afternoon, plenty of other people have been enchanted by the store. Our shopper writes,

Flying Tiger is not a store for people who harbor any kind of consumption neurosis. It is a monument to the act of shopping as pure recreation, divorced from aim or object. Nothing in sight is something you need.

We would quibble with that last line.
While Flying Tiger is definitely a danger zone for compulsive buyers, need is a relative term. Nearly everything we saw had some practical function, even if it was all dolled up in colors imported from an 80s teen comedy. The trick is knowing the difference between something you could use with something you actually will use, and resisting the temptation to just buy it anyway because it's so freaking cheap that who cares anyway?.
Easier said than done. 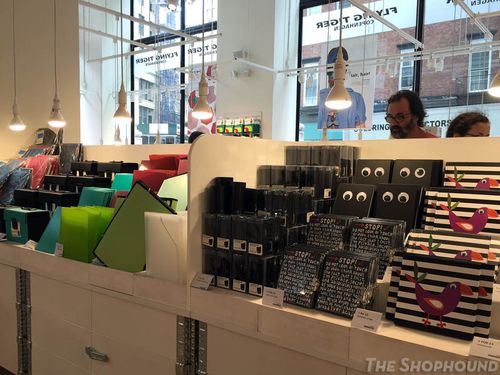