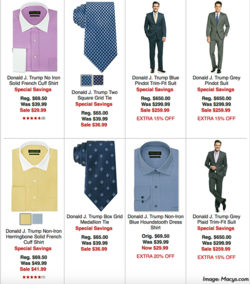 And the shoe is on the other foot.
Will Donald Trump's retail partners now give him the boot as well?
Yesterday, Donald Trump who has reveled in dismissing contestants from his reality show "The Apprentice" with a curt "You're Fired!" got a taste of his own medicine when NBCUniversal announced that it would no longer air the Miss USA and Miss Universe pageants which they both co-own, and end its relationship with him altogether. Initially, Spanish-language network Univision announced that it would drop the pageants in response to Trump's comments about Mexican immigrants in his speech earlier in June announcing his candidacy for the presidency. He referred to them as mostly criminals and rapists which incensed not just Mexican but many other immigrant communities from Latin America and beyond. Now that NBC has followed suit by ending its association with the real estate mogul, who had already announced he would not be hosting upcoming seasons of "The Apprentice" while he campaigns for President, attention turns to Macy's which sells men's tailored clothing, furnishings (pictured above) and home items under the Donald J. Trump and Trump Home labels as well as his fragrance called Success. WWD reports that a moveon.org petition garnered over 700,000 signatures on Monday, pressuring the store to dump Trump's brands which it carries exclusively. Trump's anti-Mexican screed has put Macy's at odds with its efforts to target Hispanic customers including a huge private brand launch earlier this year featuring Thalia, the Mexican singer and telenovela star. Macy's may be weighing its potential Thalia business against its current Trump business right now, because in classic fashion Trump has remained unapologetic about his statements, instead choosing to slam Univision and NBCU for dismissing him and his productions. Will Macy's be next in line for Trump's retaliatory vitriol? Time will tell, but this issue seems to be gaining traction rather than blowing over as the typically self congratulatory businessman discovers that being a general jerk gets taken very differently once you officially put yourself forth as a candidate for President.