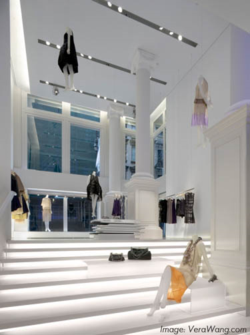 Inside the SoHo boutique Vera Wang may lose over a dispute with her landlord.

Retail real estate is renting at such high levels right now that it doesn't really matter if a landlord has a prestigious and desirable renter. Tenants who aren't paying optimum prices for leases in pricey neighborhoods are almost guaranteed to be pushed out including tony designers like Vera Wang, who has just sued the landlords of her Mercer Street boutique in SoHo (pictured left). Premier Equities purchased the retail condo of 158 Mercer Street earlier this year and promptly billed her for $272,000 in back taxes on her $45,920 monthly rent since her store opened in 2007. Wang contends that the previous owner covered the taxes, and the new owners simply want to oust her because she is paying around $220 per square foot while the average asking rate is now nearly $1,000 for a location like hers. While Wang's lease is up in 2016, she has the option to renew for five more years, which would make it a long wait for the owners to optimize their revenues from the building's retail space. How the case will shake out remains unclear, but it shows that landlords, particularly ones that have just taken over a property with existing clients, are becoming increasingly ruthless, even with presumably enviable clients.