Karl Lagerfeld To Relaunch His Signature Collection In The U.S.
Again 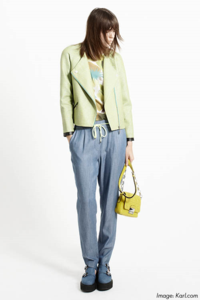 It is one of the great ironies of fashion that Karl Lagerfeld, possibly the most celebrated living designer of the modern era, has never been able to gain traction when designing under his own name in what is still the world's most important apparel market: The United States. Wildly successful designing tenures at Chanel, Fendi and twice at Chloé, have made Lagerfeld a bona fide pop-culture figure, and yet his own brand has always fizzled when introduced to American customers, but that isn't going to stop the 81-year old designer from giving his personal brand one more shot in the U.S. even when his contemporaries are contemplating retirement, if they haven't hung it up already.
This time around, the launch will be directed by the mass-market maestros at G-III Apparel Group Ltd. which has had huge success with moderate to better licensed brands from Calvin Klein, Jessica Simpson, Tommy Hilfiger, and many, many more brands that rake in cash at department stores across America. Spring 2016 will see the introduction of a new Karl Lagerfeld Paris line of Women's Apparel, Handbags and Men's Outerwear to be positioned in the oxymoronically titled "affordable luxury" category which we assume means that it will be pitted against Calvin Klein, Michael by Michael Kors and Lauren by Ralph Lauren in better department stores. A New York flagship is also being promised for next year as well.
While segments of Lagerfeld's signature line have been available through Net-a-Porter, it has been mostly absent from the U.S. since an ill-fated introduction several years ago that included a temporary store on Bleecker Street. This time, G-III is promising collections specifically designed for the U.S. market with the goal of creating another power brand, something the company has deep experience in. Relaunched in Europe in 2011, the brand has had more success overseas, and given its partners, this might finally be the opportunity to make Karl Lagerfeld a lucrative brand in his own right in the U.S.