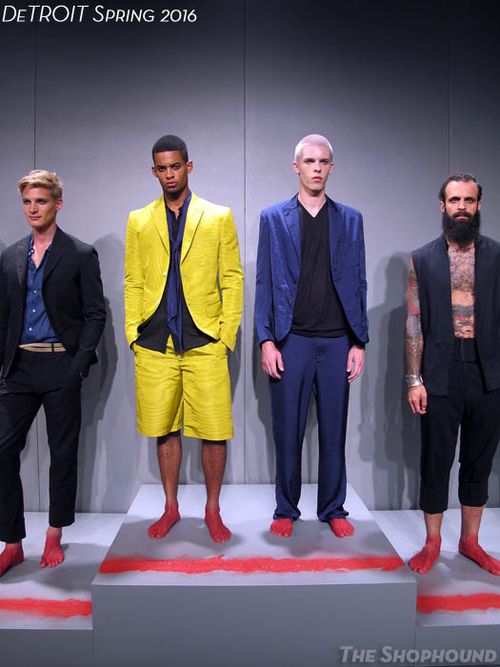 New York's first properly organized Men's Fashion Week finished up yesterday in a calm, collected manner that contrasted pleasantly with the exhausted get-me-out-of-here feeling one often encountered at the end of the formerly combined New York Fashion Weeks of the past. Of course, NYFW: Women's will probably generate the same kind of frenzy anyway, bit for the menswear folks who had to endure it, the lack of drama was welcome. In fact, the only question was posed mostly by contrarian journalists who insisted on posing the question, "do we reeally neeeed another fashion week?" For the big names like Michael Kors and John Varvatos, it probably doesn't matter, but for emerging and independent designers, the answer is an emphatic yes.
These are the guys who get lost in crush of hundreds of shows when forced to share a schedule with women's designers. Take deTROIT, a new label from designer Robert Molnar (pictured above). Named after his hometown (where along with New York, the collection is entirely manufactured), Molnar's collection wouldn't be getting the same opportunity for attention before, and now it gets a proper chance to compete for the attention of buyers who aren't rushing from show to show in far flung venues because all of the central ones are booked up. They might have missed Molnar's thoughtful tweaks of classic shapes in fuller, softer more current silhouettes that fit in easily into menswear trends for spring with red-painted feet for an extra dash of kookiness.
Next, The Shophound slipped into Platform 2 to checkout ORLEY's offerings for next season. Designers are getting the hang of how to use these new spaces. The Orley's decided to forgo a traditional runway and set up vignettes around the perimeter of the room with mid-century furniture and oriental rugs. The models circled the room, posing at stations to be viewed and photographed by the standing audience, negating the need for seating arrangements and giving everyone a good view while taking full advantage of the entire space. The collection. It was a better way to show off the still evolving label's dedication to intricate knitting techniques than having a model swiftly stride by on a runway. These sweaters bear a lingering gaze, and while some of the styling seemed a bit more edgy than the brand's fresh-faced fashion image would have called for thus far (no more greasy hair please and thank you), you could see how some of the cropped sweaters will sell nicely at retail when they ship at a more classic length. The show also included more woven pieces to round out a full collection as well as some striking decorated sneakers made in collaboration with Greats, and though the finale-free format made the actual finish of the show somewhat unclear, the designers got a strong ovation when they made it out for a bow.
Toward the end of the day, LUCIO CASTRO staged his runway/presentation hybrid on platform 3. Castro is another of New York's striving up-and-comers in his first seasons with retailers like Bloomingdale's and Saks who stands to gain the most from a separate men's Fashion Week. This season it was a tribute to Nollywood, Nigerian Hollywood, said to be the world's second largest film industry. This brought out inspired prints and pattern combinations on a model cast that was appropriately but not gratuitously diverse.
Up on 14th Street, a more avant garde component of Fashion Week took it stage as Malaysian born, Belgium based designer EDMUND OOI presented his first New York show. Were the many pantsless looks and cut-out styles likely to make their way into Saks or Nordstrom? Probably not anytime soon, but Ooi's year-old company has already been invited to Pitti Imagine Uomo and his last collection's show was sponsored by Giorgio Armani in Milan. Each look was full of ideas —overflowing with them, in fact, but if you can look past the trailing lacing and skimpy briefs (and some really cool shoes), you might find a uncanny eye for innovative knit effects and graphic patterns that point to an inventive designer to emerge from under all the flashy details. Ooi rounds out the spectrum of designers that make a men's fashion week in New York not only worthwhile but necessary.
Have a look at the shows in the gallery below. 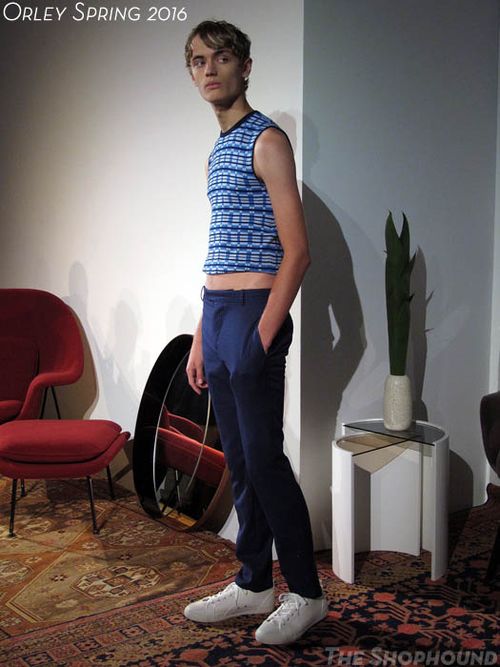