Yesterday The Shophound finally got a look at the long awaited New York Fashion Week: Men's at Skylight Clarkson Square on the northwestern edge of SoHo —and it looks good. Pretty much anything would be an improvement over cramming the American men's designer shows into the overstuffed women's schedule, but the new set-up seem to be working well, as far as we could tell, though some designers seemed to have growing pains in leaving their familiar showing spaces.
The good part is that the oppressive promotional atmosphere of Mercedes-Benz Fashion Week is gone, and on a day where scattered showers could make traveling around town problematic, a central location saved us and others from potential drenching.  Also, since the shows are in a real building, there are real bathrooms —an amenity whose importance is not to be underestimated. The sponsors are fewer and more relevant. Cadillac's show car is parked on the sidewalk where it belongs rather than in the middle of things leaving lots of room for showgoers to sit down, charge their devices and get to work without having to squeeze into some cramped press pen. Amazon has kept its promotional presence relevant, focusing on the fashion division it is dedicated to growing. Another major sponsor, SHINOLA (pictured above), used its space to present its Spring 2016 collection, giving the Shophound a chance to chat with our friend Richard Lambertson of Lambertson Truex who have transformed the Detroit-based brand's  artisanally styled leather line into a fully fledged accessories collection ready to compete at the top levels in quality and design with other luxury brands. No longer a charming side offering to the watches and bikes, the line boasts the same sumptuous leathers we are used to seeing from Shinola, now made into beautifully constructed duffels, backpacks, messenger bags and small leather goods featuring the thoughtful topstitching and details that erstwhile Lambertson Truex fans will recognize. Lambertson now shuttles between New York and Detroit where his design studio and sample workrooms are located, and like all of Shinola's products, the entire collection is manufactured in the U.S.A.

Next we were off to check out TIMO WEILAND's presentation. Platform 3, as the venue was called is a smaller room meant for static presentations. In recent seasons, the label has been showing its menswear at the Highline Hotel's cavernous space, and the move to a smaller room was not without its glitches. perhaps next season, they will avoid making a v-shaped presentation format that basically pushed the showers into a bottleneck against the narrower end of the room. Live and learn, but the collection looked fresh, a priority with the added attention a dedicated men's fashion week will bring. Known for a twisted take on preppy clothes, designers Weiland, Alan Eckstein and Donna Kang gave us more twist and less preppy for a more sophisticated feeling and a more international look. The line looked great. The presentation format needs rethinking.

Shophound Faves DUCKIE BROWN also had some relocation pains in moving from their longtime venue at Industria to the larger Platform 2 room at Clarkson Square. Menswear's current fascination with androgyny should put the veteran indie label right in its spotlight, as Steven Cox and Daniel Silver have been mixing masculine elements and traditionally feminine materials since day one. Their Spring 2016 collection found a way to continue their techniques without looking like their models stumbled through their mothers' closets or ransacked an overpriced thrift shop like a few high-profile European luxury brands have. Unfortunately, what was uncharacteristically awkward was the show staging which had half of the models walking the runway in shadow, frustrating the photographers who, as they will, made their displeasure known vocally. Having guest seated only on one side of the runway also left large portion of the room unused which seemed ill-advised. Again, with added attention to menswear this week, one would have liked such an accomplished collection to simply be seen better.

ROBERT GELLER, however, made the most of his new space. Used to showing in along, narrow, sometimes problematic space at Pier 59 Studios, the designer took to the spacious Platform 1 with apparent ease, constructing a northern European seaside-inspired set and a J-shaped runway format that made the most of the complex's largest room. Geller's sportswear beautifully reflected menswear's slow but steady move away from tight silhouettes toward looser fitting clothes with his rich color sense in full effect. Quirky hats and knitted cummerbunds pulled the looks together. Overall it was an upgrade in presentation for Geller along with a further evolution for his label.
Have a glimpse at the shows in the gallery below 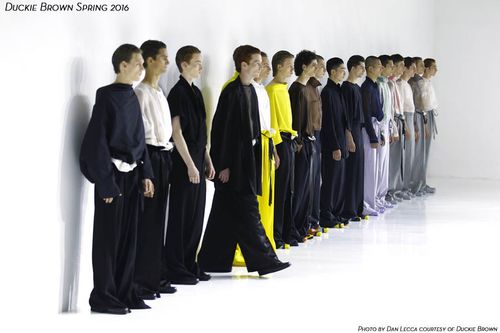