Major Restructuring May Not Be Enough To Save American Apparel 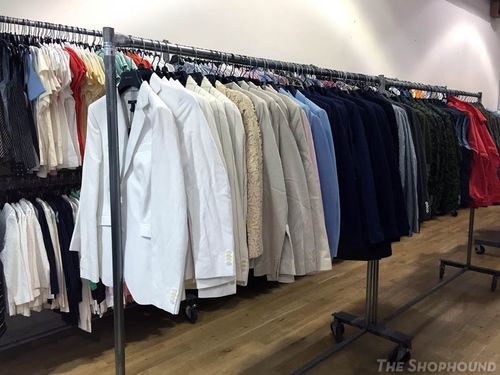 Usually, at this time of year, the sample sales have pretty much wound down as you can see in our much shorter SALE ROLL sidebar at left, but there are a couple of good events worth checking out this week including a return to form for an old favorite. It has been years now since we have missed a GANT Sample Sale, and they have taken on different forms from time to time. Originally a heavily discounted showroom affair featuring an extensive sample line in multiple size ranges, it moved to 260 Fifth Avenue and got a little more expensive and a lot bigger featuring stock as well as samples. When Gant Rugger designer Christopher Bastin took over the entire brand, the sale moved to a slightly smaller venue and again limited itself to mostly a much narrower selection of samples in a reduced size range. This season, however, the sale starting today at 260 Fifth is running a couple of months later than usual, and instead of just the usual samples, shoppers are being treated to a big old-fashioned sample and warehouse clearance featuring deep discounts and an abundance of stock in all sizes. This is the sale that Gant Sample Sale shoppers have been missing for a while, so they should make sure to line up and stock up, because there's no telling if it will be repeated like this next season. The assortments include the Gant, Gant Rugger and YALE Co-op labels for both men and women and, though the Gant by Michael Bastian collection has been discontinued, there are still some good leftover pieces mixed in from last Spring's penultimate collection that are good finds for fans of that much loved label. Savings are advertised at up to 75% off, but a look at the price list shows that that savings can easily run up to 80% to 85% off. The best bargain was a great assortment of shoe, particularly some great, classic styles for men at a measly $40 each which is almost 90% off in many cases. There is a ton of merchandise, but we are reminded that the last time Gant held a similar end-of-season clearance, they never reduced prices, even on the last day. The prices are good enough that we would recommend just getting whatever looks good. Even if they do re-reduce on the final days this weekend, it will still be a worthwhile buy. Also worth checking out this week are DESIGUAL's seasonal sample sale at Clothingline starting today which promises savings on its signature colorful prints for the whole family as well as a special sale of Handbags and Accessories from MACKAGE, also starting today on the garment district. Though that's all for this week, next week promises major sales from VERA WANG and a new, bigger venue for uptown boutique FIVESTORY's seasonal off-site clearance. Keep an eye on the SALE ROLL for details as well as the odd late breaking event, and see more images from the Gant sale in the gallery above including full price lists as well as the official flyer after the jump. 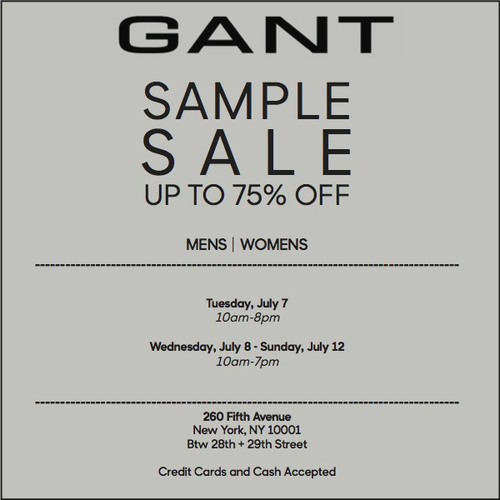