Blasé In The West Village Edition 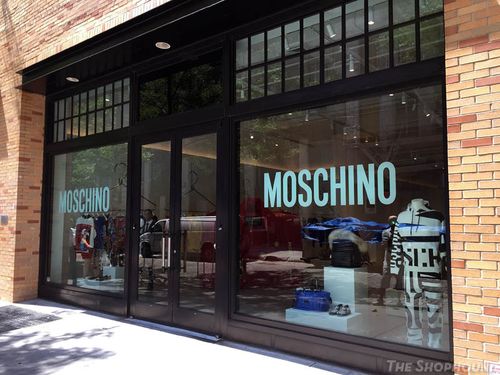 The revival and reanimation of longstanding fashion brands is in air at retail at the moment. Will the new revamped Gucci style create the kind of sensation that Tom Ford's revival did 20 years ago? Will a new designer re-invigorate Balenciaga? Will movie mogul Harvey Weinstein be able to make the Charles James label relevant for this century? Will Schiaparelli accomplish the same feat?
For the past couple of decades or so, the Moschino brand has quietly chugged profitably along, something nobody expected after its irreverent namesake designer died in 1994, but a couple of years ago, its parent company, AEFFE, decided to shake things up by hiring the cult designer Jeremy Scott to take over the brand's creative direction. Gone were the ancillary profit-making lines like Cheap and Chic and Love Moschino, and a return to outrageous runway shows was implemented. Suddenly, the new Jeremy Scott-powered Moschino is the hottest label around especially for celebrities who were already fans of the new creative director like Katy Perry and Madonna.
Part of Scott's creative strategy was to not just to re-interpret some classic Moschino codes, but to bring them back almost entirely. Rarely has a creative director been so in tune with the deceased namesake of his brand, and the merchandise hanging in the new Moschino boutique that opened this week on Wooster Street in SoHo (pictured above) gives shoppers the feeling of being transported back into the designer's late 1980s heyday. Even the original "Moschino Couture!" label has be revived as the familiar Chanel spoof quilted bags and glitzy logo belts are once again on display along with snarky slogans emblazoned on otherwise innocuous LBDs and dinner suits. The sartorial puns run rampant as giant stiletto pumps and handbags provide display space for more humanly scaled accessories and shoes like a pair of sandals made from measuring tape. In fact, the 3,500 square foot shop is designed more like an art gallery than a functioning clothing boutique —which is also a nod not to the late Franco Moschino, but to the SoHo neighborhood of the late 1980s, when it was still full of art galleries and had not yet fully transitioned into the retail destination that it is today. Brobdingnagian hangers suspended from the ceiling form the clothing racks holding carefully spaced garments delicately placed just so in a manner that discourages any casual touching, let alone taking a hanger off the rack. It only amplifies the store' gallery ambiance, which seems to be intentional. A friendly staffer made sure to let us know that there was additional, less extravagant stock in the back that he could bring out if we wanted to see it, but that would have made the place like an actual store. We preferred to enjoy the time machine that Scott and the folks at Moschino have set up for true Moschino fans. Will they turn into actual customers? That remains to be seen, although the folks at AEFFE seem to be very happy with how the revamped label has been performing in recent seasons. For now, anyway the new store is poised to be a must-visit destination for Moschino fans and and anyone else who dreams of fashion's past decades.