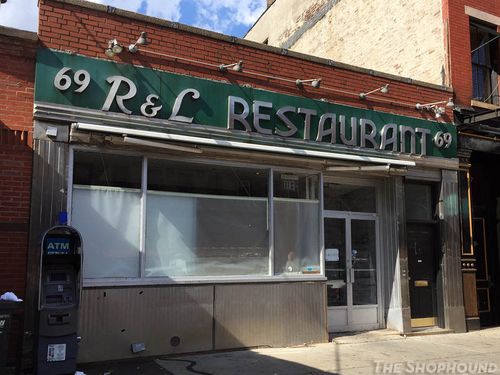 Many longtime New York dwellers like The Shophound still can't fail to cringe while strolling down Gansevoort Street when we pass the sad empty space at no. 69 where the beloved diner deluxe Florent (pictured above) used to welcome customers almost 24 hours a day. After the neighborhood stalwart was unceremoniously booted from the space in 2008, a succession of restaurants has tried to make a go of it in the space, but none succeeded, perhaps as a bitter reminder of the bad karma that builds up when an ill-advised landlord whimsically decides to push out a thriving neighborhood mainstay.
Well, the space's time as a restaurant has come to an end as Madewell has announced the address as it's newest Manhattan location. Expected to open sometime in 2016, it is not yet known exactly how much the space will be transformed, though it seems unlikely that it will still need a kitchen. While the interior will likely be completely changed, it is not yet known if the original R&L Restaurant sign and diner-style exterior will remain or if it can be altered at all as part of the Gansevoort Historic District. In any event, the string of post-Florent failures has made the space known as a cursed space for restaurants. Perhaps a change of purpose and a burgeoning national chain will revive the building's fortunes.