GET IT WHILE YOU CAN:

Blasé In The West Village Edition 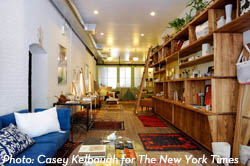 Today's Thursday Styles features Critical Shopper Molly Young's trip to a store that sounds vaguely like others that have come before it and others that will probably come after. At Calliope, each item is carefully chosen and tagged by hand to make a perfectly curated array of very special merchandise. Its owners describe themselves as "Purveyors of things we like", and, as such, they join a host of New York shopkeepers, some wildly successful, others less so, who open stores not as a means of creating income, but more as a creative expression of their own rarefied tastes. New York City's retail scene would be nothing without these merchants. Sometimes they are relatively innocuous neighborhood stores that last no more than a few years, and sometimes they wind up as influential players like Geraldine Stutz's legendary Henri Bendel of the 1970s and 80s (back when it was still at 10 West 57th Street) or today's Kirna Zabête or Odin. The ones that succeed propel shopping forward. It's hard to know where Calliope falls on this spectrum, but one thing is for sure: Molly Young is over it.

As pleasant as all the refinement was, it did not have much effect on my pulse. I wandered the store, poking at my brain and senses to react, but they couldn’t engage. I am simply not curious about the type of person who finds her personality reflected in a Brazilian quartz crystal to the degree that she is willing to pay $410 for it. Shopping can be a gesture of self-expression, but it can also be a lapse in critical thinking.

Really?
The Thursday Styes —and the Sunday Styles and T Magazine for that matter— probably wouldn't exist if it weren't for $410 Brazilian quartz crystals and the people who find their personalities reflected in them or some other equally extravagant item. New York is full of stores stuffed to the rafters with things that cost way too much, and while it seems easy to turn ones nose up at all of the people who buy the stuff in them —and there are always more than you think there are— if it weren't for them, there wouldn't be much for the Critical Shopper to write about at all.