Have A Look At The Adam Lippes For Target Plaid Lookbook

Marc Jacobs Eliminated One Of His West Village Stores 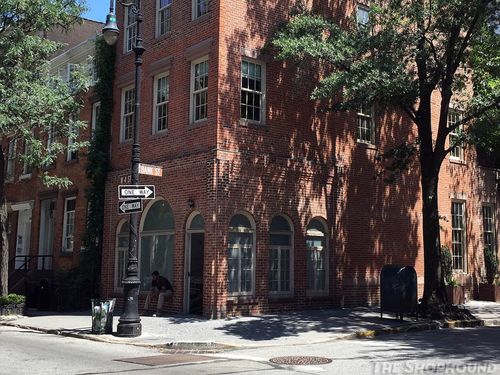 In the midst of realigning his signature label, Marc Jacobs has quietly shuttered one of his West Village stores.
The charming store at the corner of West 4th and Bank Streets (pictured above) ceased operations a few weeks ago. It was most recently a Marc by Marc Jacobs accessories store, but like most of his retail spaces in the neighborhood, it has had several identities of the years including a Men's store, and a Collection accessories store. Of all the designers' shops, this one was the furthest off the beaten path, one block away from the busier Bleecker Street corridor, with only the Little Marc children's' store on the opposite corner of the intersection to drum up traffic.
Still, with its elegant arched windows, the now empty shop remains on of the prettier retail spaces in the neighborhood. So far there's no word on a replacement tenant, and now that rent increase-induced turnover has created an unprecedented amount of available retail space on Bleecker Street, it may take some time for the storefront to be filled.
Earlier this year, Jacobs announced that his contemporary label Marc By Marc Jacobs would be folded into his signature line, causing some inevitable shakeup in his retail network. The designer remains a strong presence in the West Village, however. In addition to the aforementioned children's store, there are still the Marc By Marc Jacobs stores for men and women as well as the cosmetics shop and Bookmarc book store all on Bleecker Street. Presumably, the apparel stores will be rebranded to the main Marc Jacobs line for next spring, but it's not unusual for the designer to have a twist or two up his sleeve, so stay tuned for further developments.