Signs Of Sale Life With Sferra, Links Of London & More 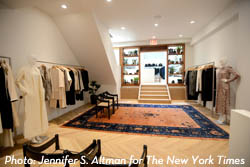 This week's Thursday Styles sends Critical Shopper Molly Young to SoHo for a survey of Totokaelo, the vertically sprawling new boutique from Seattle that has become an auspicious addition to Manhattan's shopping roster. Our shopper, a Pacific Northwest native, offers an illuminating interpretation of Totokaelo's abundance of luxurious but loose, often shroudlike garments, "There’s something about the temperature and moisture content of the air there that makes a person want to swaddle herself in garments that are half hug, half anesthetic." The same appeal holds in New York, which has its own pressures that might make a person want to spend the day swathed in something cozy.
After a detour into the store's subterranean men's department —a literal man-cave— Young ascends the many levels of women's offerings to further explore. Totokaelo's signature look is not to be approached without some expertise, however, as our shopper describes some of the items she has encountered as making her look like "a sack of cornmeal" and, comfort benefits notwithstanding, "uniquely unflattering to all of my body parts". As for a peculiar preponderance of jumpsuits, our shopper writes, "If you’re in the mood to hit the playground or just to obscure your secondary sex characteristics, any of these will do the job."
Well, that is a very specific customer, but as we know, in New York, there is a store for every kind of person.