Almost But Not Quite Edition

Is Nordstrom Planning A Rack Store Just A Block From Its Manhattan Flagship? 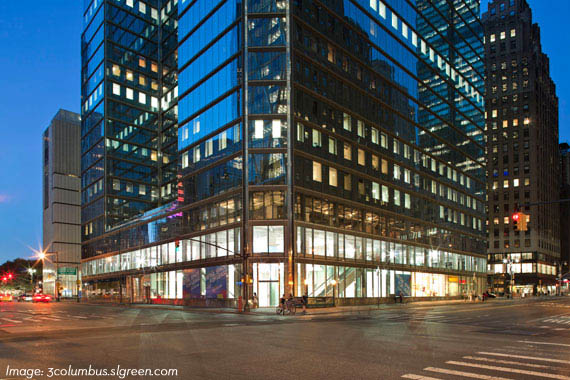 Traditionally, prestigious department stores have made an effort to keep their outlet stores a safe distance away from their full-line flagships. After all, why confuse the issue for customers? It looks like Nordstrom may be busting that paradigm as The Real Deal is reporting that executives from the off-price Nordstrom Rack are eyeing a space at 3 Columbus Circle (pictured above) for a new location along with another on West 34th Street. That would put a Rack store less than a block away from the huge, full line flagship store that is being built at the bottom of a skyscraper at 225 West 57th Street. The Rack would be in the southeast corner of the building, replacing a Bank of America branch, and literally across Broadway from an entrance to the mother ship store that is expected to open in 2019. While the flagship will be a whopping seven floors, the proposed Rack store will be also be a sizable 40,ooo square feet over three levels, giving Nordstrom something of a mega-shopping headquarters that has never been seen among Manhattan's rarefied department stores where shopping neighborhoods have been strictly stratified, and outlets are more preferably sequestered in discount centers like Woodbury Commons. Outside of independent off-price chains like Century 21 and the defunct Lehmann's, Filene's Basement and Daffy's, Manhattan had traditionally been an outlet-free zone for its luxury department stores. Lately, however, that has been changing, in part thanks to Nordstrom which first entered New York City with a Rack location just off Union Square. Now a Bloomingdale's outlet is set to open later this season at 72nd Street and Broadway, and Saks Off 5th will open in the Financial District at 1 Liberty Plaza, just on the other side of the Word Trade Center complex from an upcoming full line store in Brookfield Place. Still, if this deal comes to fruition, Nordstrom will be the first one to have its own outlet located practically across the street from one of its largest flagship stores.