Sales This Week From Cadet, Asics & Not Much Else

The Chelsea Barneys Warehouse Sale Appears To Be Done For Good 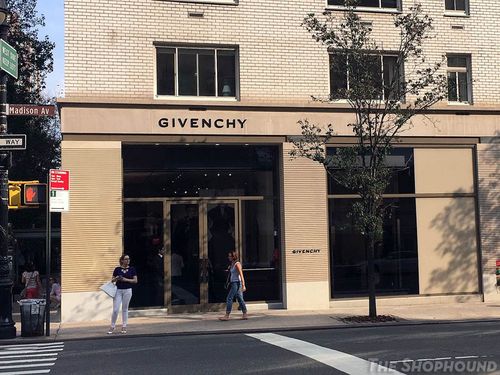 It has taken nearly two years for the folks at Givenchy to transform the space at the corner of Madison Avenue and 65th Street into it's new flagship store (pictured above), and in that time, the space's former resident, Valentino has renovated a new multi-level store on Fifth Avenue as well as created a slightly smaller store on Madison, and Alexander McQueen has taken over the space next door which was also part of Valentino's boutique.
Why it took Givenchy so long to get what is a sleek but not architecturally complex store open remains a mystery, but who can ever fully explain Manhattan construction delays? In the time since the store was announced, the Givenchy brand, which was just hitting its stride as a revived Haute Couture maison, has grown in stature almost exponentially. That is probably why on a muggy Monday afternoon on the last day of August, while most of the other stores in New York City were enduring the week-before-Labor-Day doldrums, the new Givenchy store was hopping with customers —and not "just looking" customers, but serious, buying customers.
Clearly, there is some pent-up demand for the Riccardo Tisci designed version of Givenchy that has been anticipating the arrival of the new boutique. The store is cleanly designed with a graphic black and white interior that sets of Tisci's often dark and graphic collections. Inspired by an art gallery (which is, frankly not a novel idea for a designer boutique in this day and age) the store's notable focal point is a group of high counters for accessories in the center of the store, neatly arrayed with handbags with their breathtaking prices noted beside them on the plank. The arrangement oddly recalls the original Helmut Lang boutique in SoHo which greeted visitors with similarly blocky displays, but these days, highlighting profit-making accessories is nothing novel. Apparel is relegated to the sides, and the men's line, another area of strong growth, is in the mezzanine upstairs in the back and set off by white glass-tiled walls.
The store is getting off to a strong start, and despite the fact that Barneys appears to carry about three times as much Givenchy merchandise a few blocks away, there remains a clear desire among some shoppers to buy in designers' own stores.
To celebrate the long awaited store, Tisci will take the unusual step of debuting the Spring 2016 Givenchy collection during New York Fashion Week on September 11th. While not unprecedented for a Parisian house to show in New York —Nicolas Ghesquière showed his Fall 2003 Balenciaga collection here to help promote the label's first U.S. boutique in Chelsea— it is a pretty rare occurrence that, this year, will help fill the void left by the unexpected departure of the Donna Karan Collection from the schedule. Creating even more excitement, the house announced today that it will distribute hundreds of tickets to the show to the public, another unusual move that is likely to set off just a touch of Wonka-like frenzy to get in as the date approaches. If it seems like Givenchy is hijacking New York Fashion Week, then you can feel confident that this is probably a one-time thing, but this season's fragmented Fashion Week can probably use the extra excitement as it tests out a new arrangement that spreads official shows between Moynihan Station in midtown and Skylight Clarkson Square in western SoHo.