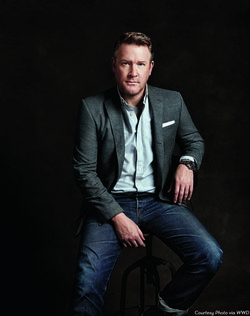 Earlier this year, designer Todd Snyder (pictured at right) closed his City Gym extended pop-up store in NoLita with a nice big sale and a hint that a new, permanent boutique was in the works, but no news on that front has appeared until today when it was announced that the designer had sold his company to American Eagle Outfitters.
This was a little bit of a surprise.
While both companies share a classic American-based aesthetic, American Eagle is a mall mainstay, while Snyder's own line, a Shophound favorite, has more luxury designer-level positioning. Even his collaboration with sweatshirt-maker Champion has an exclusive, limited distribution. Would the designer collection get downgraded into more of a moderate priced brand?
It turns out that American Eagle was less interested in Snyder's luxe line than they were in the Tailgate Clothing Co. t-shirt brand that Snyder had started with his family in the early 1990s. While The Shophound and most other consumers had no idea that there was any connection between Snyder and the vintage-inspired t-shirt company, it turns out that it has been helping to fund his designer collection which he started in 2011, and has a strong following among the collegiate customers that AE values so highly. Tailgate will be expanded with its own stores, and Snyder himself will become an executive vice-president of American Eagle while continuing to run his own label independently from the larger chain. Its more exclusive designer status will be maintained with more funding to allow it to expand as well, including a search for a freestanding Todd Snyder boutique in New York as confirmed by American Eagle global brand president, Chad Kessler in WWD today. Now, we just have to sit back and with for him to find a space, which is easy, right?

Posted at 09:59 AM in Acquisitions, Chains, Designer Boutiques | Permalink | Comments (0)