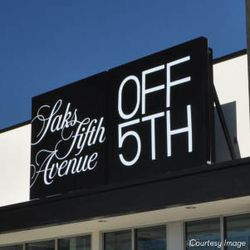 Honestly, we didn't plan to be spending so much time on Saks today, but news is news and the New York Post is reporting that Saks Off 5th, the chain's off-price division, has signed a lease to take over the former Daffy's space at 135 East 57th street between Park and Lexington Avenues. This is significant not only because it will be Saks' second Off 5th store in Manhattan, once considered off limits to the luxury department store's discount division, but because it comes perilously close to the midtown luxury shopping district on Fifth and Madison Avenues. In fact, the new store will only be about a 20 minute walk from the Saks Fifth Avenue flagship at 49th and Fifth and a mere two blocks from Bloomingdale's. Saks has already announced its first Off 5th Manhattan store opening next year at 1 Liberty Place in the Financial District.
While the Post has no confirmation on the specific size of the lease, it reports that the former Daffy's store was estimated at 60,000 square feet and the store is expected to open sometime next Spring. The three level space includes some street level selling area with most floor space on two concourse levels below. Landlord Charles S. Cohen reportedly held out for three years to sign a tenant that met his requirements which on the one hand demonstrates a tenacious resolve, but on the other, represents a growing problem in Manhattan and other cities where prominent, high priced retail spaces sit empty for months and years on end while landlords wait for deep pockets tenants which may never materialize, creating rent blighted stretches of storefronts in otherwise upscale and thriving neighborhoods.
Anyway, that's all the Saks news we have today. . . until something else pops up.