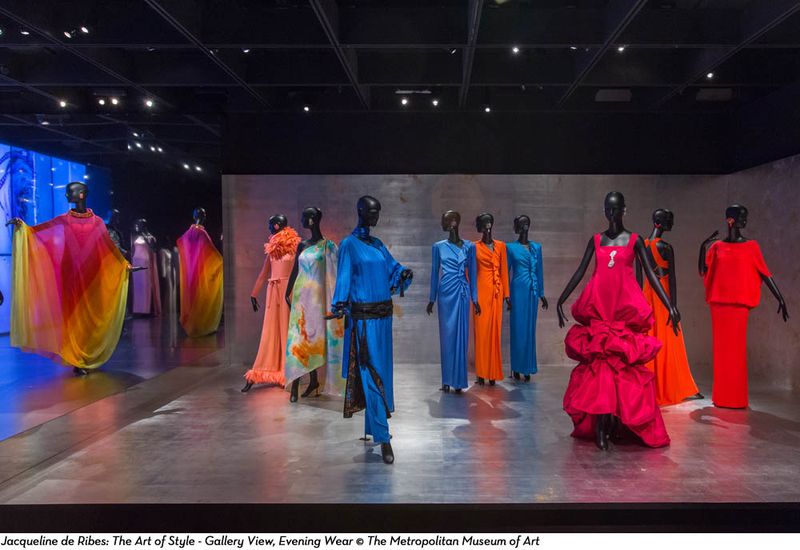 The best result of the Anna Wintour Costume Center being built at the Metropolitan Museum of Art is that we can now regularly expect two exhibitions a year from the Costume Institute instead of just the one blockbuster show in the spring. Last November, it presented a scholarly show about mourning dress traditions the 19th and 20th Centuries which was fascinating and beautifully exhibited if a bit inherently morbid. Starting today, the Costume Institute has spun 180˚ in the opposite direction with Jacqueline de Ribes: The Art of Style, (pictured above and below) featuring highlights from the (mostly evening) wardrobe of the French countess turned designer who remains one of the best dressed women in the world, and a representative of the generation when fashion media celebrated stylish women who bought their own clothes and dressed themselves without the help of stylists. De Ribes is not an eccentric or trailblazing dresser in the way that we see other prominent women of distinctive style. While we have seen splashier, more extravagant gowns at the Costume Institute, we have rarely seen a collection of them as refined and representative of one person's singularly impeccable taste. 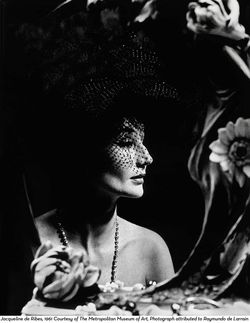 To fully understand the show, one must understand a bit about The Countess de Ribes herself (pictured at right). Born into aristocracy, she became the Vicomtesse de Ribes when she married her husband at 19. Fascinated as a child by fashion from watching her grandmother's haute couture fittings, she became as expert in design as the great couturiers she patronized including, well, most of them, but most notably Yves Saint Laurent, Emanuel Ungaro and Marc Bohan of Christian Dior. to supplement her haute couture purchases, she had her own designs made and, unable to draw, found a young sketch artist to assist her in bringing her ideas to life. That was Valentino Garavani for whom, like many of Europe's designers, she became a muse, or something more, really. Recognizing her flawless eye, designers allowed de Ribes to adjust and edit their designs to the point where they would occasionally just turn over their ateliers to her whims. Ironically, it was her privileged station in life that for many years kept her from going into business herself. It would have been considered unseemly for her to have her name on a business, even a luxurious one, so she quietly found work advising designers and producing theater and ballet projects. Finally, shortly after her husband inherited his title as Count in 1981, she was allowed to start her own luxury Prêt-à-Porter business which lasted until 1995. Many of her own designs are included in the show, showing up beautifully next to gowns from more celebrated couturiers, and if they seem to recall the style of designers like Bohan or Saint Laurent, it is hard to say if it is because she was influenced by them or, more likely, they were inspired by her for so many years. At the press preview earlier this week, outgoing Curator in Charge of The Costume Institute Harold Koda noted that it would be easy to breeze through the show and gaze at the elegant gowns, but the exhibition bears lingering scrutiny pointing out that de Ribes the designer always saw her work in three dimensions often resulting in sophisticated spiral cut creations meant to flatter from very angle. He even broke his own strict rule against showing re-creations of older designs when she presented him with a reproduction of a Dior gown by Saint Laurent from the 1959-60 season that was realized perfectly under her strict instruction. It only took Dior's contemporary atelier about six tries to meet her exacting standards.
Ultimately, the exhibition, probably unintentionally, serves as a satisfying companion to another current fashion exhibition focusing on another woman of unique individual style. If Jacqueline de Ribes represents the ultimate in rarefied taste, then FIT's Fashion Underground: The World of Susanne Bartsch, shows a deceptively complex woman at the other end of the style spectrum. Taken together, Bartsch's no-holds-barred costumes and de Ribes' supreme elegance seem like two different sides of the same coin with each one using fashion as a a form of expression in windy different ways. FIT's show runs through through December 5th, and seeing them together makes for a fascinating double header.

Jacqueline de Ribes: The Art of Style through February 21, 2016 at the Metropolitan Museum of Art 1000 Fifth Avenue at 82nd Street, Upper East Side 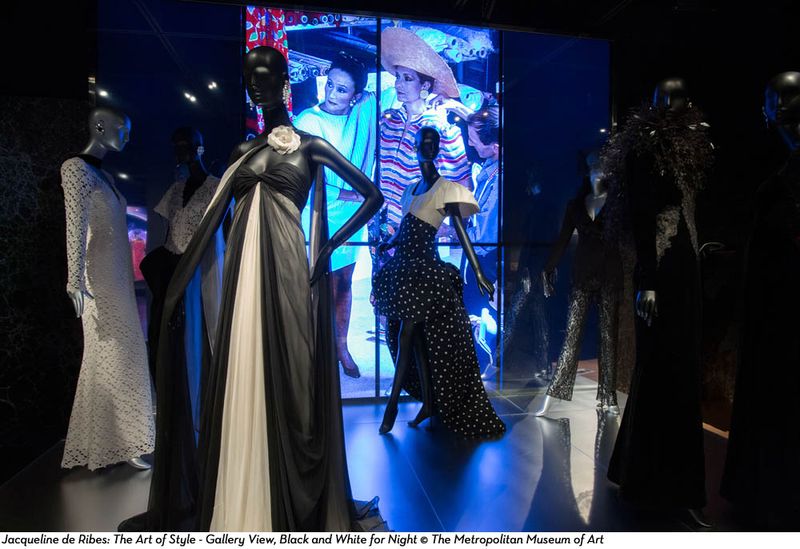