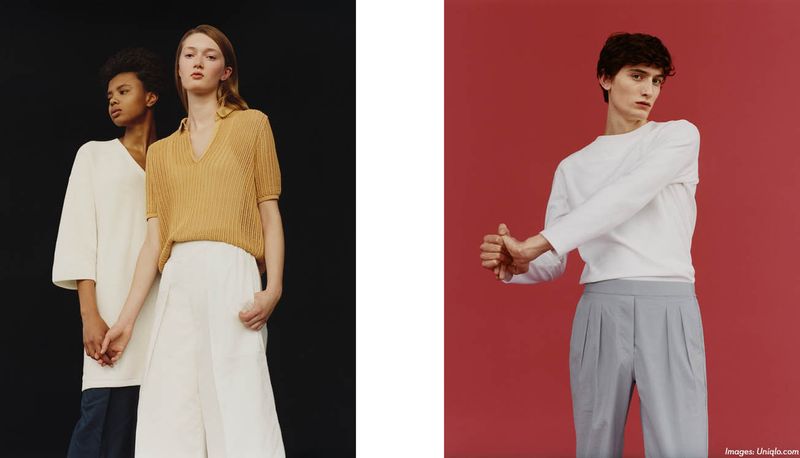 For those of you who have been waiting for the arrival of the Spring edition of the Uniqlo and Lemaire collaboration, the countdown has begun. The chain's global website for the line designed by Christophe Lemaire and Sarah-linh Tran went live today with flat preview images of every single item plus a bunch of lookbook shots on models to get a better idea of the pieces' fit and proportions. There are no radical surprises for spring, just more of those sophisticated basics in a muted color palette that look much more expensive than they actually are. As with last fall's debut collection, there are tons of great knits, this time in cotton. Overall, the prices actually seem a bit lower than last season, if you can believe it. Many of the sellout items from last season have been translated into lighter weight fabrics including some of those heavy woolen men's trousers that sat on the racks but seem much more appealing now in more seasonal materials. The great shirts are now available in an expanded range of colors and fabrics including bold, summery awning stripes, and there are plenty of new spring items like shorts, tanks and a great cotton blouson jacket just to name a few.
The collection arrives in stores and online on March 4th and, as with last season, the complete collection will only be available in the three Uniqlo flagships in Manhattan on Fifth Avenue, 34th Street and Broadway in SoHo, so start setting your plan of attack now. A smaller, select assortment will be available in in only three more stores in California including Union Square in San Francisco, South Coast Plaza in Costa Mesa and the Beverly Center in Los Angeles. Everyone else will have to on alert for the when the collection hits the web on March 4th. If last season's response is any indication, you won't have too much time to get what you want in the size you need, so set your alarms, and pick out what you want to buy early.

UPDATE:
There's good news and bad news.
First the good: Uniqlo has announced that as a result of last year's strong positive response to the collaboration, the number of stores carrying Uniqlo and Lemaire in the U.S. will be increased to nine including Chicago and other unspecified locations. It will be also be made available in 16 additional markets and regions.
Now the bad: According to the retailer, this will be the final edition of the Uniqlo and Lemaire collaboration. While they had hinted that it might be a continuing program like the Ines de la Fressange line, this will be the last iteration of the collection, so don't sleep on it. It's not coming back next fall.

See the new lookbook after the jump

Click each image for a larger view in a new window

Posted at 09:47 AM in Chanel, Designer Collaborations, UNIQLO | Permalink | Comments (0)