SonyStyle To Say So Long To Midtown

Paul Smith Is Leaving Flatiron For Bleecker Street. . . For Now 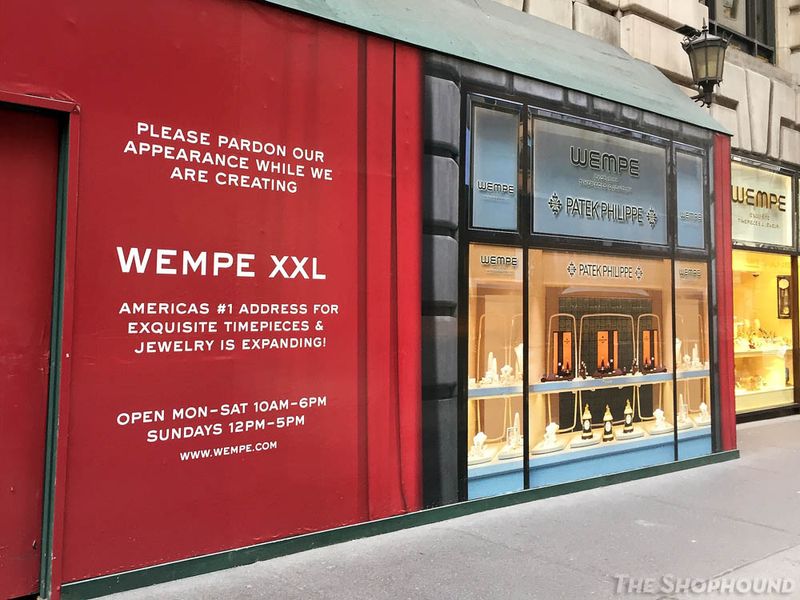 Even though retail has been tough for the past unseasonably warm season, one category seems to weather consumer glitches a bit better than most. The highest end jewelry and watches will always hold appeal in New York if not for the locals then for the endless stream of tourists that pass through the city at any given moment. We have already seen Bergdorf Goodman unveil a bigger, better precious jewelry salon, and just a few blocks down Fifth Avenue, a similar expansion is under way at Wempe, the city's most prestigious watch store.
You may be thinking that Tourneau is the leader in that category (and it's really a matter of opinion), but while the big T has more locations, more brands and generally more flash, Wempe is the one with the more concentrated  focus on the most luxurious and exclusive watchmakers without all of those designer and mid-range, mass brands. While they have never tried to be all things to all people like their great competitor, they are about to get quite a bit bigger. It all came about last year when it came time to renegotiate its 15-year lease on the Fifth Avenue side of the Peninsula Hotel at 55th Street. Rather than getting the old rent-hike heave-ho that so many of its longtime neighbors —even major designers— have recently been faced with, Wempe was offered the opportunity to take over the Lindt Chocolate and Swarovski stores next door. Well, those guys got the heave-ho, obviously, but we're pretty sure they will be fine. Wempe will now be extending its red carpet to around 5,550 square ft. to transform itself into the newly dubbed Wempe XXL. Rather than broadening its assortments to fill all that new space, the store is expected to maintain its current lineup of watchmakers, but offer a greater depth of merchandise. That will mean more option for customers in search of the perfect Patek Philippe, Audemars Piguet and , of course, Rolex and the like. Look for the store to reveal its renovation sometime this summer, just in time to take advantage of summer tourist season, or, as we like to call them at the high end, non-local clients.