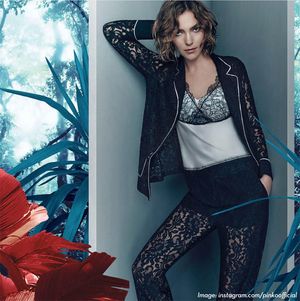 Generally, we would suggest that Pinko, derogatory midcentury slang for lefty communist sympathizers, would not be the best name for a contemporary women's apparel line, but we have all gotten used to a fashion line called Acne by now, so we suppose that all bets are off in that respect.
Anyway, Pinko (pictured at right), an Italian based sportswear chain is making what appears to be its U.S. debut on the north-western corner of Madison Avenue and 80th Street in the former home of a Comptoir des Cotonniers unit. The line, whose prices appear to be comparable to Sandro or Maje, has an abundance of stores throughout Europe, the U.K., the Middle East and China, but has not yet ventured into North America. The Commercial Observer tells us that its debut store will be roughly 1,000 square feet, and that's all we got fro now. No opening date has yet been set, nor have plans for further expansion been released, but the upper reaches of Madison Avenue right on the pedestrian route to the Metropolitan Museum should be fertile ground to launch this sort of brand in the vicinity of Vince, J.Crew, Nanette Lepore and their ilk. Stay tuned for more details.