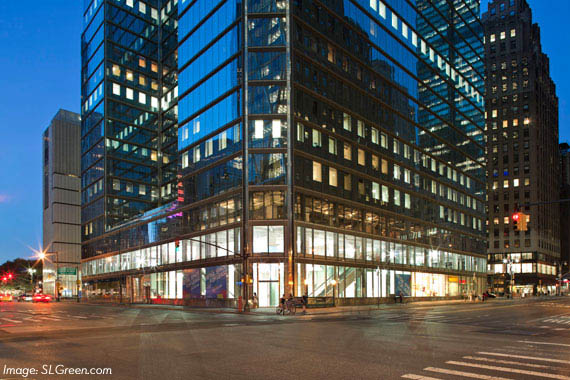 You would think that 285,000 square feet over seven floors in a brand new, specially built skyscraper would be enough room for Nordstrom to launch it's long awaited Manhattan flagship, but the folks at the home office in Seattle are apparently feeling a little bit less confident about having enough space, now, so they have expanded —across the street.
WWD tells us that Nordstrom has taken a three level 43,000 square foot space at 3 Columbus Circle (pictured above) just across Broadway from the upcoming Nordstrom Tower for a second store. Rumors about the chain's interest in the space popped up about three months ago, but speculation was that it was to maximize the brand's presence with a flagship Nordstrom Rack store. If it seemed a bit unlikely that they would place an outlet unit so close to what is expected to be one of its crown jewel flagships, that's because it was. In fact the space will be an extension of the flagship as the home for certain departments relocated to make more room in the main store. While those departments have not yet been identified, speculation centers around shoes or menswear. While Nordstrom is known for its massive shoe departments, it is hard to imagine that it would move them across the street into a different building, making it difficult for sales staff to easily cross-sell footwear to complete apparel purchases. A men's department, however, can be and has been easily encapsulated in a separate, multi-level building as shown by Bergdorf Goodman's 25-year-old Men's store across Fifth Avenue from its original store and the freestanding men's store Saks Fifth Avenue is planning in the Financial District to complement the branch opening at Brookfield Place later this year. Nordstrom is also known for having one of the strongest men's businesses in the industry which could be maximized in New York City with its own storefront.
Or perhaps they haven't even decided yet. The additional space had included a Bank of America branch which the building's owner bought out to make the deal, and, since it is part of a building that is already built, unlike the very much under construction flagship store, Nordstrom has plenty of time to decide what to do with the space as well as create the store inside. Look for an announcement confirming the new space's use. . . eventually.