Paul Smith Is In
Mulberry, Black Fleece & Marc Jacobs Men's Are Out On Bleecker 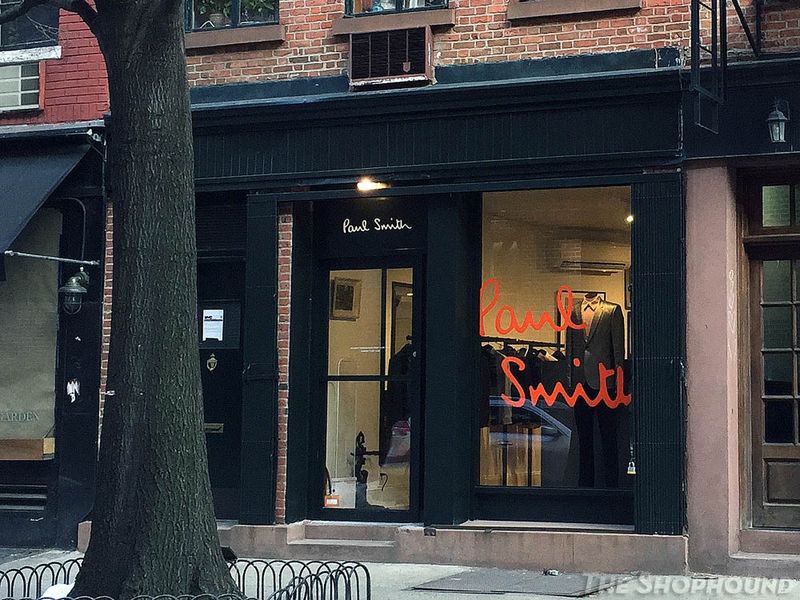 Remember when Bleecker Street was such a hot retail address that the older stores were being pushed out and replaced with new designer boutiques at a breakneck pace?
Well, that's over.
As luxury labels retrench in the face of economic uncertainty, Bleecker street is suddenly looking less like a hotspot and more like a tony neighborhood in a holding pattern, perhaps a couple of years behind the neighboring Meatpacking District where once precious retail space is now available in greater abundance. Since the Holiday season, A few more Bleecker Street storefronts have gone empty. Mulberry has quietly exited its outpost at 387 Bleecker leaving it with larger stores on both Madison Avenue and Spring Street in SoHo. Perhaps a tiny store that benefited from Bleecker Street's hotspot-of-the-moment glamor is no longer such an imperative when there are other bigger stores in more heavily trafficked neighborhoods with more potential for sales volume and brand visibility.
Mulberry is not the only company reconsidering its retail strategies. Marc Jacobs is in still the midst of re-inventing his own label. Since the Marc by Marc Jacobs label that made up most of his Bleecker Street stores' offerings has been discontinued, his West Village colony of shops is in a transition of its own. It was always a kind of free-flowing arrangement with stores regularly switching places. With Want Les Essentials de la Vie having already having taken over one of the designer's former shops, the latest branch to bite to the dust is the teeny tiny men's store whose windows are now blacked out. That leaves Jacobs with only his original shop at 403/405 Bleecker, Bookmarc across the street at #400 and the beauty store at #385, which is still a strong showing, but we are still wondering how things will settle retail wise for Marc. His men's store has always been problematic. Having bounced around from one of Jacobs' West Village locations to another, it always seemed to wind up in the same stall-like space that could only hold a few customers at a time and seemed like a poor setting for one of America's premier designers to present his collections. Part of this probably results from the fact that Jacobs has been candid over the years about his personal disinterest in menswear as a designer. He rarely if ever wears his own brand, preferring more attention getting outfits from labels like Comme des Garçons and most recently being very vocal about buying copious amounts of Alessandro Michele's first Gucci collection. His lack of interest is reflected at retail where the label has little traction in menswear, and industry watchers are wondering if the men's division has many more seasons left at all without stronger direction. Closing its store couldn't be seen as a sign of faith in the division.
While once it was incredibly difficult for a retailer to even acquire a space on Bleecker Street in its most desirable stretch between Christoper Street and Hudson Street, now a prospective retailer has something of a selection. Since Brooks Brothers has sadly discontinued its Thom Browne designed Black Fleece collection, its boutique at 351 Bleecker at the corner of West 10th Street has also been shuttered leaving another prime spot open, and more space at 345 Bleecker will be available soon as Comptoir des Cotonniers has posted a closing notice in the window of its unit there. In addition, the empty where the neighborhood favorite Manatus Restaurant once served up classic diner fare is still empty after it was forced out nearly two years ago in hopes of attracting a higher paying tenant who has yet to show up.
It's not all bad news, however. As promised, Paul Smith has opened up a temporary store at 357 Bleecker Street (pictured above) to replace his original Flatiron store. As reported, it's smaller than the shuttered  lower Fifth Avenue boutique, but Smith promises a bigger permanent unit on the way. So far the store is only carrying early Spring deliveries heavy on his lower priced label, PS. Perhaps even after a more impressive space  presents itself, Smith, who has also streamlined his profusion of labels, should consider hanging on to the Bleecker Street store as a PS-only shop. It would fit in perfectly with the street's more recent focus on slightly more accessible designer labels, and it would fill up a shop that might otherwise not find a tenant a swiftly as it might have a few years ago.

See a gallery of closing notices after the jump.

Click each image for a larger view in a new window. 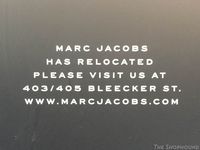 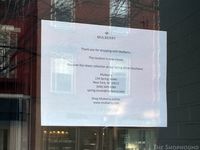 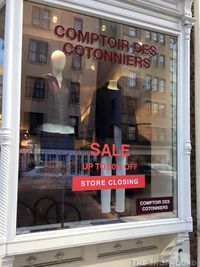