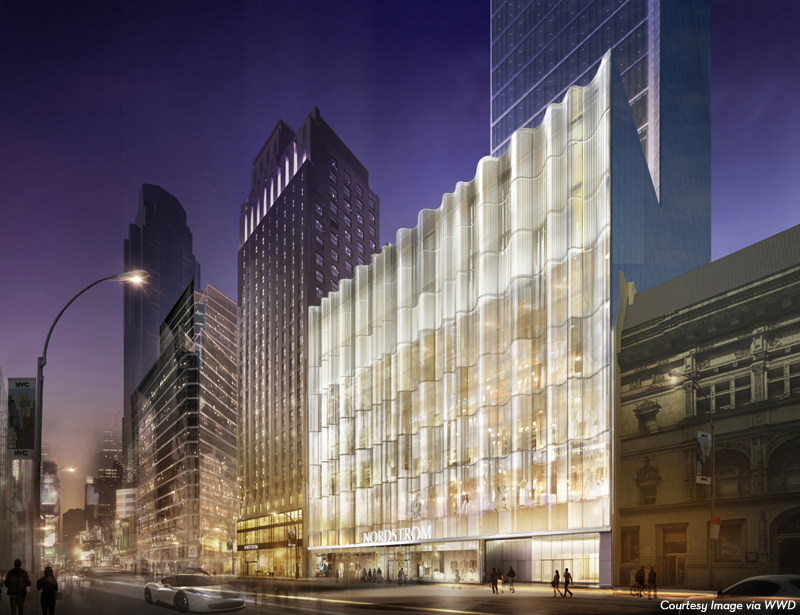 While we all know that Nordstrom is building a huge flagship over at Broadway and West 57th Street, the details of what it will look like have remained a mystery —until now. Today's WWD confirms in detail much we have heard and speculated about concerning the first major flagship department store built in Manhattan since Barneys on Madison Avenue over 20 years ago. We also get some interesting new information, like the fact that the plans are so elaborate that the store is has now added a year to its projected opening date, so we will all have to hold out to 2019 to see it all come to life.
But there's more than that. “It can’t be just another nice regional store. It’s got to be better,” Nordstrom Inc.’s co-president Pete Nordstrom tells WWD. We know that the retailer is expanding its plan with more space across Broadway at 3 Columbus Circle, and now it has been confirmed that the space will, as has been widely speculated, be a freestanding men's store which, if it is ready in time, may actually open before the main flagship is finished. The other notable news is that Nordstrom will be taking space in every building along the block of Broadway between 57th and 58th Streets that are adjacent to the enormous new tower that will house the seven selling floors of the main store. That includes 1776 Broadway on the 57th Street corner, and 5 Columbus Circle on the corner of 58th. Their interiors will be integrated into that of the new building to increase space on the street level and floors above, while their exteriors will remain distinct from the new construction and, in the case of 5 Columbus Circle, dramatically restored to resemble its original Beaux Arts splendor (pictured in the gallery after the jump). That will give the store entrances through all of those buildings as well as one previously known to be integrated, 1780 Broadway. Now the flagship will have a continuous frontage that wraps all the way around the Broadway block from 58th to 57th Streets.
But what will the new building look like?  presented a starkly modern exterior designed by architect James Carpenter featuring undulating glass panels that will allow maximum use of natural light inside the store as well as allowing clear views inside for passersby on the street outside (pictured in the rendering above).
The combined stores will give Nordstrom a total of 363,000 square feet of space, second in size only to the chain's main Seattle flagship store. The interior will feel familiar to seasoned Nordstrom shoppers with the retailer's signature floor plan featuring a central atrium with escalators. What it won't have is the vast expanses of space compared to stores like Bloomingdale's or Saks not to mention Macy's. Nordstrom compares the individual floors' size to those in Bergdorf Goodman, but they will feature the open plan you find in most of the chain's stores with a minimal use of hard, in-store boutiques.
This leads us to the question of exactly which designers Nordstrom will be carrying in its new showplace, a tricky question in Manhattan where luxury designers typically allow for somewhat wider distribution than they do in other cities, but still don't like to be seen in every single store. Nordstrom will have to convince many top designers who are already satisfied with their distribution between Bergdorf's, Barneys, Saks Fifth Avenue, Bloomingdale's and likely their own flagship boutiques that they should add another point of sale in Manhattan. This work has been ongoing since the store was announced. "One of the things that will help with vendors is that we’ve got this West Side orientation that is somewhat unique,” says Pete Nordstrom, putting actual space between the new store and the concentration of big department stores further east.  “We believe the West Side customer is underserved,” he explains. “We ended up picking this location for a reason — the combination of being able to build something really exciting and interesting and doing it in a neighborhood that’s underserved.” The added floor space will also help the retailer to come to agreements with top designers for representation in the store. Nordstrom already carries nearly every major luxury label in various locations throughout its network of stores. It is now more a matter of convincing them to add one more door in Manhattan where luxury department stores are proliferating downtown and Neiman Marcus, another key account for any top designer, is also entering the fray for the first time at around the same time.
The new flagship will be the most expensive store the chain has ever built, and it is expected to be its most productive as well. To that end, Nordstrom is obviously taking its time to make sure that every aspect of the store will be the best that it can be. We will find out  in three years, now, how it all turns out, but few department store chains have a track record for expansion that is as successful as Nordstrom's has been over the past few decades. The results should be worth waiting for.

See more renderings of the upcoming store after the jump