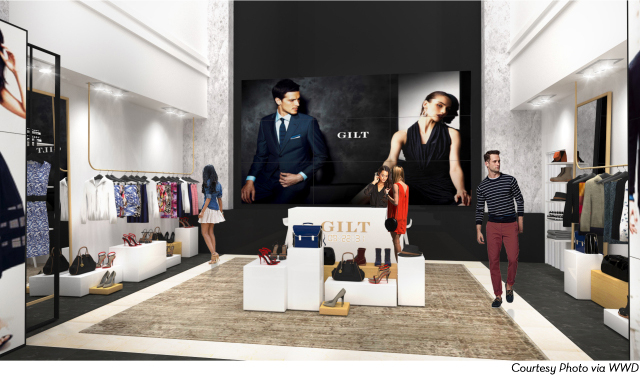 While some shoppers are counting down the last few days before Chelsea's new Barneys opens, others are keeping their eyes on Midtown where an opening date has been set for New York City's first Saks Off 5th location. Eyebrows were raised when it was announced only a few months ago that the luxury department store's outlet chain would open right in the middle of full-price territory on East 57th Street, a mere seven blocks uptown from the Saks Fifth Avenue flagship at 50th and Fifth. Now we have learned that not only will the store will open on Thursday March 3rd, but it will contain the first of what is expected to be several in-store Gilt boutiques in Off 5th locations (rendering pictured above). WWD reports that the 1,000-square-foot boutique will be situated at the landing of the first escalator in the two-level, 47,333-square-foot underground store. The shop will include "Gilt by Appointment" services and will mirror the sites online events. New merchandise that is released online at 12 noon will also be unveiled at the store just in time for lunch-hour shopping. Off 5th will also accept returns of online purchases in the store but is not yet ready to facilitate in-store pick-up of online purchases.
The new shop is one of the results of Saks parent company The Hudson's Bay Company's recent purchase of Gilt. While Off 5th and the online retailer will begin to be marketed in tandem, they will continue to maintain separate buying and merchandising personnel to differentiate the more luxury minded site from the broader assortments at Off 5th. We will be able to see how well the new siblings play with each other in just over 3 weeks when the new store opens at 125 East 57th Street between Park and Lexington Avenues. It's worth noting that in our rather extensive experience, off-price stores like this one tend to be packed with exceptionally good bargains at the grand opening, so first-day shopping is always recommended.