PLAY ALONG AT HOME: 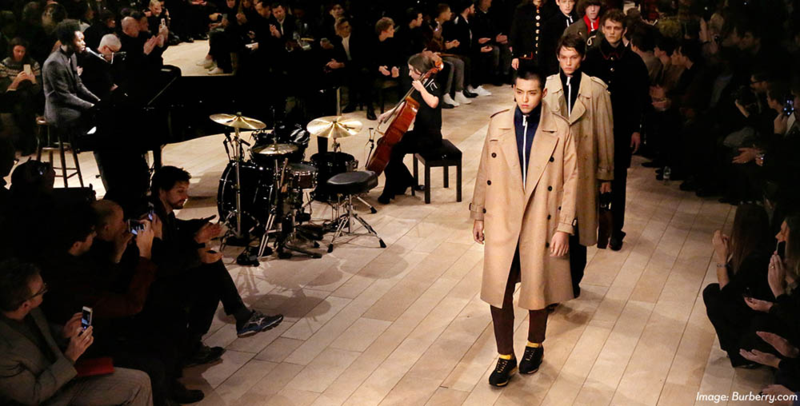 As as public fascination for the once industry-only runway shows of Fashion Weeks around the world, the entire runway show system is being upended, Designers are now questioning the wisdom of presenting their collections six months ahead of the time when they will be available for customers to purchase, and several designers have already announced that the collections they present at New York Fashion Week for when next week will be composed of merchandise to be immediately available. So far, the biggest luxury names have mused about possible changes, none have pulled the trigger on radically altering their presentation concepts —until today. Burberry's chief creative and executive officer Christopher Bailey has announced that starting this September, the label's runway shows will present only merchandise available immediately after the conclusion of the runway show. Only two shows will be presented per year mixing both men's and women's collections, eliminating separate men's shows of which the one held a few weeks ago at London Fashion Week Men's (pictured above) will have been the company's last.
Burberry has been dynamic in recent months when it comes to taking a hard look at how it does business and communicates to customers. Last year, the brand made the decision to consolidate its various diffusion labels under a singular Burberry Brand, merging both its luxury Prorsum and more accessible London and Brit collections. It's a move that eliminates the question of what is the "real" label for customers and puts it more in line with international mega-brands like Gucci or Louis Vuitton which have always eschewed sub-brands.
How this will affect other luxury level designers remains to be seen, but the restlessness in the crowded runway show schedule is clear with major designers increasingly using their clout to show their collections when they see fit. Hedi Slimane has announced that both the men's and part of the women's Fall 2016 Saint Laurent would be held next Wednesday, February 10th in Los Angeles where he lives and maintains his studio rather than in Paris, the home of one of France's most revered fashion maisons. Tom Ford, for his part has often moved his shows around to suit his own convenience, showing in different fashion capitals and even moving his show to Oscar Weekend in Los Angeles a year ago to accommodate the shooting schedule for his upcoming movie. Last season, he abandoned the runway altogether in favor of a music video starring Lady Gaga and a Soul Train line of dancing models, and for Fall 2016, he has announced that he will show both men's and women's lines to buyers and press in intimate presentations in New York.
So no livestream, then?
The longtime paradigm of multiple Fashion Weeks in various international cities is now entering a stage of flux that could change the way fashion is presented everywhere. Hang on. This is just the beginning.

UPDATE:
Tom Ford has announced in Burberry's wake that he too would be showing Fall 2016 Collections in September of this year. He tells WWD, “Our customers today want a collection that is immediately available. Fashion shows and the traditional fashion calendar, as we know them, no longer work in the way that they once did. We spend an enormous amount of money and energy to stage an event that creates excitement too far in advance of when the collection is available to the consumer."