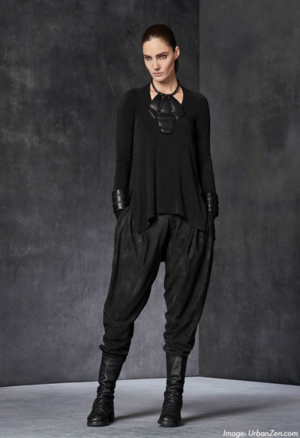 A current Urban Zen look.
Click for a larger view in a new window

There's a silver lining for true blue Donna Karan customers who were caught by surprise with last year's announcement that the superstar designer's main collection would be folded in favor of a revamped DKNY collection designed by the guys behind the Public School brand. With Donna herself relinquishing creative responsibilities at her namesake label, would this be the end for her as a designer?
As it turns out, no. In at least one store, her side project will take center stage.
In a not terribly surprising development, the Donna Karan Collection shop on Bergdorf Goodman's sixth floor, currently in its last days of selling her final Resort collection, will be converted to an Urban Zen shop by the middle of next month. For those unfamiliar with the line, her website describes Urban Zen as ". . .  a philosophy of living by Donna Karan, touched and inspired by cultures and artisans from around the world. We give back by supporting the Urban Zen Foundation, which has a mission to raise awareness and inspire change in the areas of Preservation of Cultures, Well-Being and Education."
Put more simply, it is also the name of three freestanding shops in New York City's Greenwich Village, Sag Harbor, New York, and Aspen, Colorado that Karan has operated for several years independently of the now LVMH-owned fashion empire that she founded in the 1980s. Now, the line will take over Karan's Bergdorf boutique in what should be a fairly seamless transition. So far as we know, this is the first time that Urban Zen has entered the wholesale business, likely because, in previous years, it would have been too great of a conflict with the former Donna Karan Collection. Karan's fans who are unfamiliar with the label will be comforted to find that the apparel offerings, limited though they may be, basically look like classic Donna Karan designs including draped jersey dresses, roomy cashmere sweaters and leather accent pieces as seen in the image above from the current offerings. Don't be surprised to see Urban Zen's home accessories and other items in the shops well. Given one of the designer's longtime pet peeves that has returned to the fashion conversation, you can also expect the merchandise to be sold in-season with winter clothes in the winter and summer clothes in the summer.
Donna Karan has always had a special relationship with Bergdorf Goodman. It was where she launched her own label, and her personal appearances at seasonal trunk shows were known to cause mob scenes that nearly gridlocked the entire floor.
Bergdorf's won;t be the only store left with a gap in its offerings. Saks Fifth Avenue also has a Donna Karan shop on the second floor that, as of last week, was still offering what was left of the final collection. While they might not be looking to add a new shop to the floor that will soon be converted into a grand beauty department as part of a top-to-bottom store renovation, the development at Bergdorf's suggest that we might see Urban Zen grow a bit more to fill the inevitable void left by the end of the original Donna Karan label with new Donna Karan-designed merchandise.