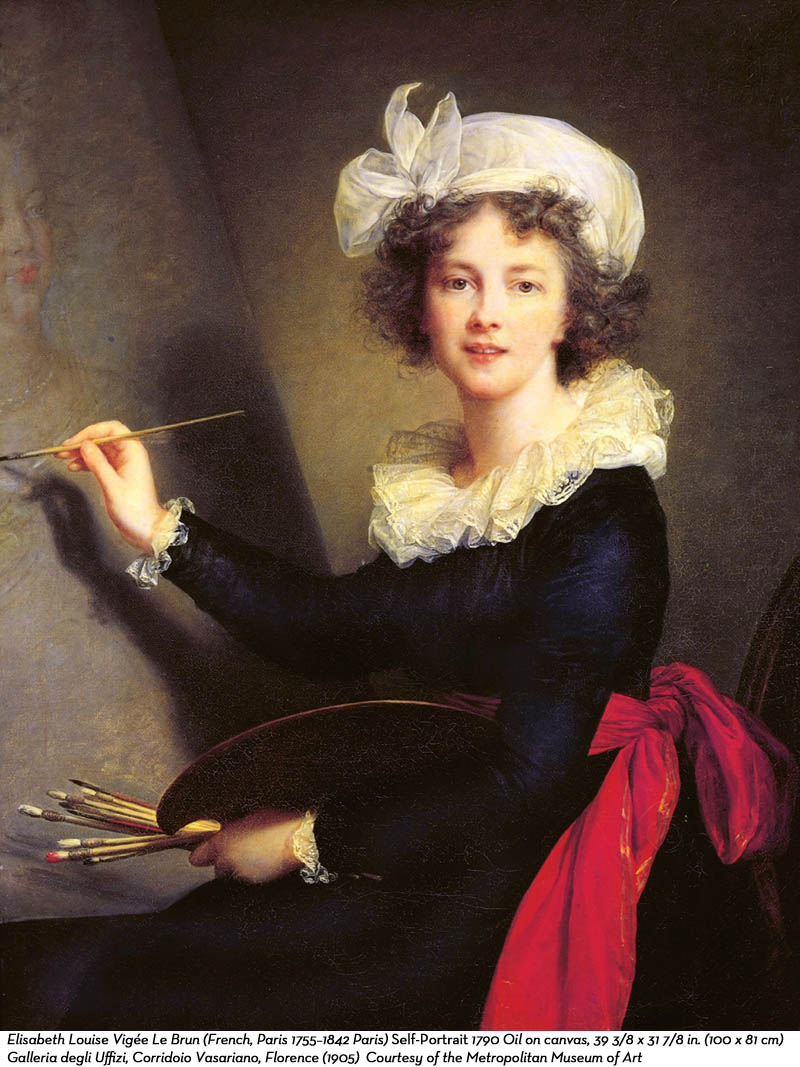 If you think that 18th Century painting is something that will make your eyes glaze over, then think again. If you haven't been to the Metropolitan Museum in a while, then it's time to stop by to discover one of the period's finest portrait painters. Vigée Le Brun: Woman Artist in Revolutionary France is the first major retrospective exhibition devoted to Elisabeth Louise Vigée Le Brun (pictured in a self-portrait above) who made her reputation in the court of Louis XVI with her vibrant likenesses of Marie Antoinette and other members of the aristocracy. It's hard to imagine anything other than institutional art-world sexism that might have kept Vigée Le Brun out of the spotlight for a couple of centuries or so. Self-trained and excluded from Fench art institutions because of her gender, she found favor with the French royal family not just because of her talent and skill, but also because of her personal charm and ability to entertain her subjects throughout what would otherwise be tedious posing sessions. This also resulted in representations that were particularly lively for the period, showing dimensions of humanity not always evident in portraiture of the time. Forced to flee because of her associations with royalty during the French Revolution, Vigée Le Brun made her way to Florence, Naples, Vienna, St. Petersburg, and Berlin, painting her way through a good portion of Europe and leaving remarkable portraits of each region's aristocracy in her wake before ultimately making her way to back to Paris as the revolutionary climate cooled. The 80-piece Exhibition includes major works from private collectors including Queen Elizabeth II well as from the Musée National des Châteaux de Versailles et de Trianon, the Kunsthistorisches Museum in Vienna, the Musée du Louvre that are rarely if ever lent to other museums. It's an illuminating look into not only the art of one of the French royal court's most lavish eras but also one woman's very real story of surviving turbulent, even life threatening times.
If you go this weekend, you will also get an opportunity to catch a glimpse into the life of one of France's modern aristocrats. The Costume Institute's Jacqueline de Ribes: The Art of Style closes on Sunday at the Anna Wintour Costume Center, so it's your last chance to peek into the estimable wardrobe of Countess Jacqueline de Ribes, one of the world's most stylish women, so think of it as a multi-era French art and fashion doubleheader.

Vigée Le Brun: Woman Artist in Revolutionary France through May 15th and Jacqueline de Ribes: The Art of Style through February 21st at the Metropolitan Museum of Art, 1000 Fifth Avenue at 82nd Street, Upper East Side