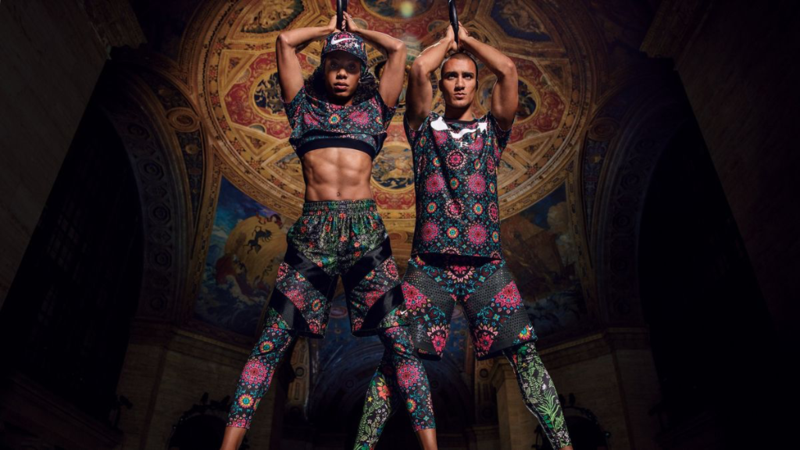 Things couldn't be going better for Riccardo Tisci at Givenchy, where he may be the only designer at a luxury brand besides Karl Lagerfeld at Chanel and Fendi who seems secure and happy in his current role, but he is cleverly keeping his own signature brand alive by way of a hot collaboration with NikeLab that promises to get even hotter this summer. After his personal redesigns of the classic Nike Air Force Ones and Dunks, Tisci will be diving into activewear with a two delivery collection called NikeLab x RT: Training Redefined.
While it is likely that most of the collection for men and women will be worn as streetwear, it is designed to be fully compatible with the most intense athletic training which is why the preview image above features track-and-field star Sanya Richards-Ross and decathlete Ashton Eaton modeling looks form the line (Well, OK, they are also featured because they are potential Olympians who look fantastic in even the most mundane athletic wear, but they look even more awesome here).
What we know so far is that the first delivery in July will consist of jackets, tops, tights, shorts and footwear for men and women in black and white graphic patterns. The second delivery in August is timed and themed to tie into the Summer Olympics in Rio de Janeiro, and features lush floral prints featuring blossoms native to Portland Oregon where Nike is headquartered and was founded, Taranto, Italy where Tisci hals from, and Rio, home of this year's Olympics and a favorite travel destination of the designer. We are conservatively expecting this particular capsule collection to be huge, and it should be available at the NikeLab store in SoHo as well as other retailers that have previously offered the Nike x R.T. collaborations previously like Barneys, Dover Street Market and Kith, to name a few, though no official retailer list has been released.